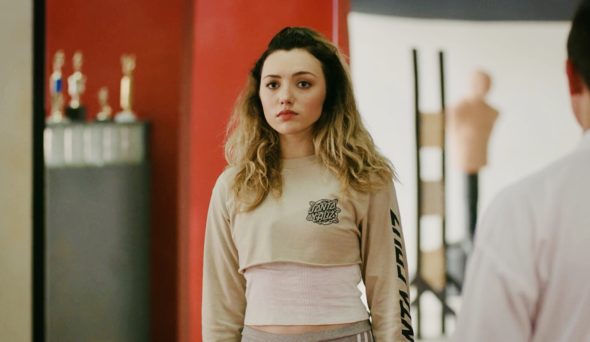 School Spirits has been ordered to series by Paramount+. The new young adult drama will star Peyton List (Cobra Kai, above) and revolve around a high schooler who went missing and is now stuck in the afterlife. Oliver Goldstick (Pretty Little Liars) is serving as the showrunner for the drama.

Paramount+ revealed more about the new drama in a press release.

“Paramount+ today announced a series order for a new young adult drama, SCHOOL SPIRITS (working title), based on the upcoming graphic novel by Nate & Megan Trinrud and Maria Nguyen. Produced by the Awesomeness Live-Action Studio, the eight-episode season is set to star Peyton List (“Cobra Kai,” “Bunk’d”), with Oliver Goldstick (“Pretty Little Liars,” “Bridgerton”) serving as showrunner and executive producer, along with Nate and Megan Trinrud, who wrote the pilot. Max Winkler (“Cruel Summer,” “Jungleland”) is directing the pilot. The series will premiere on Paramount+ on a date to be announced.

SCHOOL SPIRITS (WT) focuses on a teen stuck in the afterlife who decides to investigate her mysterious disappearance alongside a group of other students who are also stuck in limbo at their high school. The graphic novel is planned for publication in fall 2023 by Clarion Books/HarperAlley, an imprint of HarperCollins Children’s Books.

The project joins Paramount+’s growing lineup of YA content, including the service’s hit iCARLY series revival, as well as the upcoming film HONOR SOCIETY starring Angourie Rice (“Spider-Man: No Way Home,” “Mare of Easttown”). Both projects were also produced by Paramount’s Nickelodeon and Awesomeness Live-Action Studios.

Production of SCHOOL SPIRITS (WT) is overseen by Shauna Phelan and Zack Olin, executive vice presidents and co-heads of Nickelodeon and Awesomeness live-action series and film.”

A premiere date and additional casting for the series will be announced later.

What do you think? Are you planning to check out School Spirits on Paramount+ when it eventually debuts?