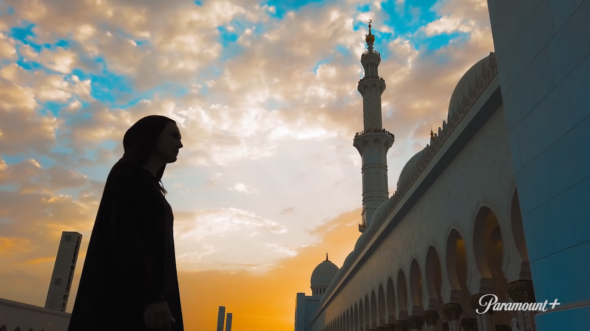 Lioness is headed to Paramount+ with Zoe Saldaña set to lead the CIA drama. The series, from Taylor Sheridan (Yellowstone), “follows a Marine recruited to befriend the daughter of a terrorist to bring the organization down from within.” Production will begin on the series in June and additional details will be released at a later time.

“Paramount+ today announced that Zoe Saldaña is set to star in and executive produce the service’s upcoming drama series LIONESS, from Academy Award(R) nominee Taylor Sheridan. Academy Award winner Nicole Kidman, with her production company, Blossom Films, will join LIONESS as an executive producer. Produced by MTV Entertainment Studios and 101 Studios, the series will begin production in June 2022 with Tom Brady (NOS4A2, Colony) at the helm as executive producer and showrunner.

LIONESS is based on a real-life CIA program and follows a Marine recruited to befriend the daughter of a terrorist to bring the organization down from within.

“I am a huge fan of Taylor Sheridan’s work and am honored to help him tell his next amazing story with LIONESS,” said Tom Brady, showrunner and executive producer. “Taylor has created an epic, gripping, global spy thriller centered on a group of complex, strong women, and I can’t imagine anyone better to help bring these characters to life than fellow executive producers Nicole Kidman and Zoe Saldaña.”

“LIONESS is based on an incredible, largely unknown program between the CIA and special forces, where U.S. female soldiers would infiltrate the local community and gather intelligence,” said David C. Glasser, CEO of 101 Studios. “Taylor has crafted an intense and gripping story within this uncharted world, and we are honored that it will be brought to life on Paramount+ through the acting and producing talents of Zoe Saldaña alongside executive producers Nicole Kidman and showrunner Tom Brady.”

What do you think? Are you planning to watch Lioness on Paramount+ when it eventually premieres?

I will check it out. Hope it’s good, as I need some new shows to follow.