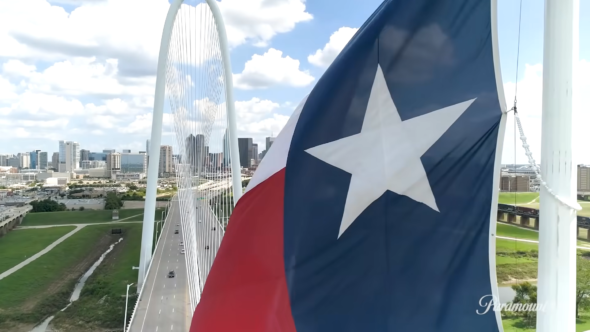 Land Man has found its leading man. Billy Bob Thornton has been cast in the new Paramount+ series from Taylor Sheridan (Yellowstone). The drama series is based on the 11-part Boomtown podcast and production will begin next year.

Paramount+ revealed more about the new drama in a press release.

“Paramount+ today announced that Academy Award(R) winner Billy Bob Thornton has been tapped to lead the upcoming drama series LAND MAN. From executive producer and Academy Award(R) nominee Taylor Sheridan, the series will feature Thornton as a crisis manager for an oil company. Produced by MTV Entertainment Studios and 101 Studios, LAND MAN will begin production in 2023.

Based on the notable 11-part podcast “Boomtown,” LAND MAN is set in the proverbial boomtowns of West-Texas and is a modern-day tale of fortune-seeking in the world of oil rigs. The series is an upstairs/downstairs story of roughnecks and wildcat billionaires that are fueling a boom so big it’s reshaping our climate, our economy and our geopolitics.

“We are in the privileged position to be able to work with people that we truly admire,” said David C. Glasser, CEO of 101 Studios. “With LAND MAN, Taylor developed it with Billy Bob in mind, and we were thrilled when he came on board. He is not only one of the greatest actors of our generation but also a true creative partner.”

What do you think? Do you plan to watch Land Man on Paramount+ when it eventually premieres?

Super Excited To See This New Creation Out By Taylor Sheridan and His Long List Of Producers and Directors That Do A Fabtastic Job With All Of Their Creations! Love Billy Bob Thornton and I’m Sure This Will Follow In The Long List Of Sheridan’s Masterpieces!

Being a former Landman myself, of course I will watch it! Love ALL Taylor Sheridan’s work as well as Billy Bob Thornton being cast for lead role!!!
Can’t wait

Yes I will watch. T.S. Is a great creator of shows IE/ Yellowstone,1883. Those great shows.So no doubt Land Man will be great. Can’t wait. Next year can’t come soon enough. But something to look forward too.

Look good so disappointed ended Goliath on amazon prime last year season 4 that it how ridiculous need more of it. Love that show so good.