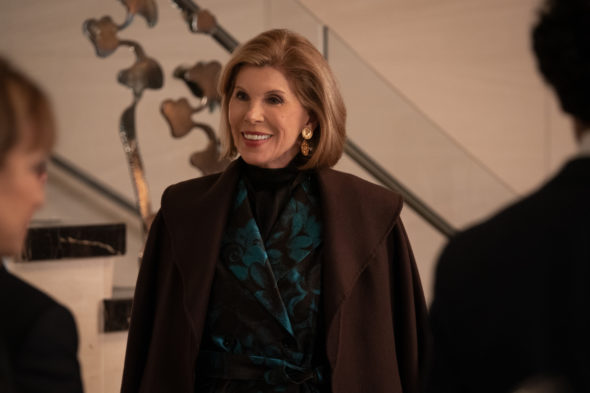 It’s back to court for Diane and company. Paramount+ has renewed The Good Fight TV series for a sixth season. The fifth season finishes in August and new episodes are released on Thursdays.

The Good Fight stars Christine Baranski, Audra McDonald, Sarah Steele, Michael Boatman, Nyambi Nyambi, Zach Grenier, Charmaine Bingwa, and Mandy Patinkin. A sequel to The Good Wife, the legal and political drama centers on Diane Lockhart (Baranski), Liz Lawrence (Audra McDonald), and others at the Reddick, Boseman & Lockhart law firm in Chicago. In the fifth season, Diane is forced to question whether it’s appropriate for her to help run an African American law firm with Liz when the firm loses two top lawyers (Cush Jumbo and Delroy Lindo). Meanwhile, Marissa (Steele) and the firm become entangled with Hal Wackner (Patinkin), a regular Chicagoan who decides to open his own courtroom in the back of a copy shop.

“The Good Fight’s provocative, whip-smart, and no-holds-barred world remains as relevant as ever, continuing to entice new audiences as one of Paramount+’s top-performing original series and acquisition drivers,” said Nicole Clemens, President, Paramount+ Original Scripted Series. “We are thrilled to continue The Good Fight’s enduring legacy with a sixth season and can’t wait to see what the brilliant minds behind the series, [series creators] Robert and Michelle King, tackle next.”

Last week, the Kings saw their other Paramount+ series, Evil, renewed for a third season.

Check out our status sheets to track new TV series pickups, renewals, and cancellations. You can find lists of cancelled shows here.
What do you think? Do you enjoy The Good Fight TV series? Are you glad that it’s been renewed on Paramount+ for a sixth season?

FANTASTIC NEWS! This news made our day! We loved The Good Wife and have loved The Good Fight since day 1! Every week is a great show that surprises us. We love the 33 1/3 Court. We hope to see more stories about it. Thank you those from above!

Loved The Good Wife and was very upset when it finished. To see a spin off series come out which is a spin off was like heaven. I love The Good Fight. I cant wait for every episode. Interesting, topical, deals with all issues .Very entertaining. The writers are amazing

Why is this show still on? Who watches this drivel.