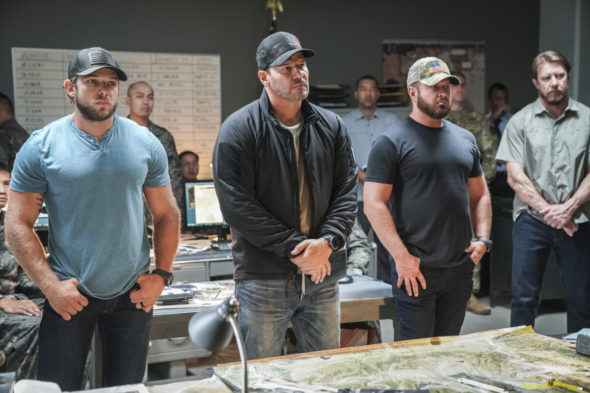 This elite unit of United States Navy SEALs will return for new missions on Paramount+. The SEAL Team TV show has been renewed for a sixth season on the streaming service. The fifth season of 14 episodes finished being released on January 23rd. The sixth season will have just 10 episodes, a typical order for streaming services these days.

A military drama series, season five of SEAL Team stars David Boreanaz, Max Thieriot, Neil Brown Jr., AJ Buckley, and Toni Trucks. The military action-adventure series centers on an exclusive Navy SEAL unit as they train for, plan, and risk their very lives to carry out perilous missions for the sake and honor of their country. Fierce and focused Jason Hayes (Boreanaz) leads the Tier One team. Despite the hardship it causes them and their families, this SEAL team is ready, willing, and able to embark upon secret missions at the drop of a hat. Team members include Jason’s trusted confidant, Ray Perry (Brown Jr.); loyal yet self-destructive Sonny Quinn (Buckley); and young Clay Spenser (Thieriot), a multilingual and second-generation SEAL. No-nonsense DEVGRU Intelligence Officer Lisa Davis (Trucks) is assigned primarily to Bravo Team.

All Five Seasons Available to Stream Exclusively on Paramount+

Feb. 1, 2022 – Paramount+, the streaming service from ViacomCBS, today announced the renewal of hit military drama SEAL TEAM for a sixth season. The series follows the professional and personal lives of the most elite unit of Navy SEALs, as they train, plan and execute the most dangerous, high-stakes missions our country can ask of them. David Boreanaz stars as Jason Hayes, the respected and intense team leader, alongside Max Thieriot, Neil Brown Jr., AJ Buckley and Toni Trucks.

“We are very excited to welcome SEAL TEAM back for another season on Paramount+,” said Nicole Clemens, President, Paramount+ Original Scripted Series. “The show’s loyal fanbase followed the series to its new exclusive home, and it has proven to be a high-performing title for the service, consistently in the top 10 most-watched original series. We can’t wait for the fans to see what our brilliant creative team has in store for Team Bravo next season!”

About Paramount+:
Paramount+, a direct-to-consumer digital subscription video on-demand and live streaming service from ViacomCBS, combines live sports, breaking news, and a mountain of entertainment. The premium streaming service features an expansive library of original series, hit shows and popular movies across every genre from world-renowned brands and production studios, including BET, CBS, Comedy Central, MTV, Nickelodeon, Paramount Pictures and the Smithsonian Channel. The service is also the streaming home to unmatched sports programming, including every CBS Sports event, from golf to football to basketball and more, plus exclusive streaming rights for major sports properties, including some of the world’s biggest and most popular soccer leagues. Paramount+ also enables subscribers to stream local CBS stations live across the U.S. in addition to the ability to stream ViacomCBS Streaming’s other live channels: CBSN for 24/7 news, CBS Sports HQ for sports news and analysis, and ET Live for entertainment coverage.

About CBS Studios:
CBS Studios is one of the world’s leading suppliers of entertainment programming, with more than 70 series currently in production for broadcast and cable networks, streaming services and other emerging platforms. The Studio’s expansive portfolio spans a diverse slate of commercially successful and critically acclaimed scripted programming, which includes genre-defining franchises such as “NCIS,” “CSI” and the ever-growing “Star Trek” universe, award-winning late night and daytime talk shows, as well as an extensive library of iconic intellectual property. The Studio also develops and produces local language and international content originating outside of the U.S. with series in the U.K., Europe, the Middle East, Australia and Asia.

A premiere date and additional details will be released at some point in the future.

What do you think? Do you enjoy watching the SEAL Team TV show on the Paramount+ streaming service? Will you be looking out for the sixth season?

I hope Sonny gets court martialed for dating Lisa and she gets articled 12 and gets a bad conduct discharge. Hope Sonny is sent to Leavenworth to break rocks.

I love this show and can hardly wait for season six. So many times the show has had me sitting on the edge of my couch it is action packed. My father was in the Navy and I know if you were still alive he would be watching the show. The actors who betray the seal team are awesome and not bad to look at if I may say.

SEAL Team is an exciting show with an amazing cast of characters. Love the program. Can’t wait for it to return for season 6…I keep checking!

I would love to see sonny and lisa together instead of apart. Wish they would let them