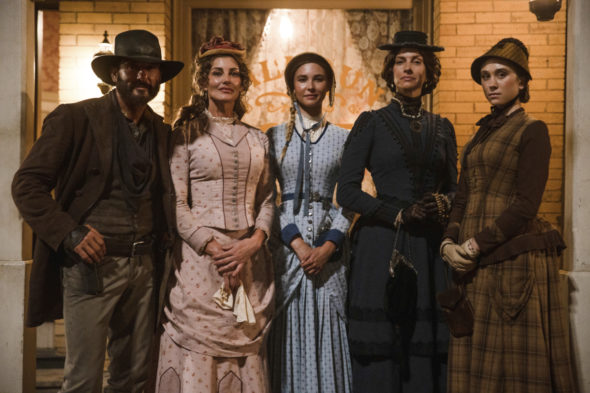 The Dutton family’s journey is continuing. Paramount+ has ordered additional episodes of the 1883 drama which launched on December 19th. The streaming service didn’t call the order a second season or a renewal but, as THR notes, “adding another batch of episodes to an existing season is sometimes a contractual sleight of hand used in order to continue a series without invoking the salary bumps triggered by an additional season order.”

A Western series, the 1883 TV show is a prequel to Yellowstone. It stars Sam Elliott, Tim McGraw, Faith Hill, Isabel May, LaMonica Garrett, Audie Rick, Marc Rissmann, Eric Nelsen, and James Landry Hebert with Dawn Olivieri, Emma Malouff, Alex Fine, Gratiela Brancusi, Anna Fiamora, Amanda Jaros, Nichole Galicia, Stephanie Nur, Noah Le Gros, and Martin Sensmeier in recurring roles. Guest stars include Billy Bob Thornton, Graham Greene, and Tom Hanks. The story follows a previous generation of the Dutton family as they embark on a journey west through the Great Plain to establish what would eventually become the Yellowstone Ranch. It’s a stark retelling of Western expansion, and a study of one family as they flee poverty in Texas to seek a better future in America’s promised land — Montana.

“The incredible storytelling and stellar performances behind 1883 have fueled phenomenal new records for Paramount+,” said Tanya Giles, chief programming officer, ViacomCBS Streaming. “Promoting the series through linear sampling on the Paramount Network during their latest record-breaking season of Yellowstone further enabled us to introduce Sheridan’s loyal audience to this fantastic new series.”

What do you think? Have you watched the 1883 TV series on Paramount+? Are you glad to hear that there are more episodes on the way?

I disliked how this series ended so I’m really happy to hear there will be extra features. I really hated the loss of Sam Elliot. I wish he could hv continued to be in this series.

So excited for more episodes! Even though it was “dark”, I still loved it. Superb acting

The 1883 prequel to Yellowstone has been a lift of spirits to all I have spoken to. Additional episodes will be more than welcome…a continuing pleasure!

1883, from the perspective of an 18 year old young woman is true delight!

Would enjoy seeing 1883 to bring us closer to 1932 and what has happened to the family to that point.