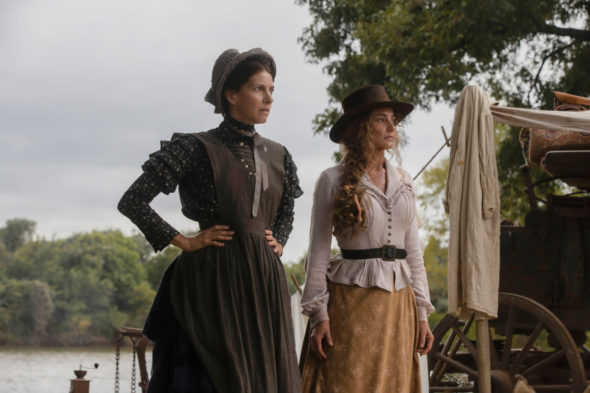 How difficult will the Dutton family’s journey become in the first season of the 1883 TV show on Paramount+? As we all know, the Nielsen ratings typically play a big role in determining whether a TV show like 1883 is cancelled or renewed for season two. Paramount+ and other streaming platforms, however, collect their own data. If you’ve been watching this TV series, we’d love to know how you feel about the first season episodes of 1883 here.  *Status update below.

A Paramount+ Western series, the 1883 TV show is a prequel to Yellowstone. It stars Sam Elliott, Tim McGraw, Faith Hill, Isabel May, LaMonica Garrett, Audie Rick, Marc Rissmann, Eric Nelsen, and James Landry Hebert with Dawn Olivieri, Emma Malouff, Alex Fine, Gratiela Brancusi, Anna Fiamora, Amanda Jaros, Nichole Galicia, Stephanie Nur, Noah Le Gros, and Martin Sensmeier in recurring roles. Guest stars include Billy Bob Thornton, Graham Greene, and Tom Hanks. The story follows a previous generation of the Dutton family as they embark on a journey west through the Great Plain to establish what would eventually become the Yellowstone Ranch. It’s a stark retelling of Western expansion, and a study of one family as they flee poverty in Texas to seek a better future in America’s promised land — Montana.

What do you think? Which season one episodes of the 1883 TV series do you rate as wonderful, terrible, or somewhere between? Do you think that 1883 on Paramount+ should be cancelled or renewed for a second season? Don’t forget to vote, and share your thoughts, below.

I absolutely love 1883 and your star outline drew me to watch and i have now found several new stars i will follow in the future.The story line maybe history but what a beautiful job putting it down on paper and on the screen.Love this show along with yellowstone,mayor of kingstown and waiting impatiently now for seaon 2 and 4 but also for unseen shows 6666,love Jimmy,1932 eventually not now finish 1883 before starting next book in the Dutton family and their journey to today.

1883 is horrible. There’s no reality to the show. I could not get into it. Maybe it’s because Tim & Faith are not convincing enough for real ranching life. I’m not the type to watch something just because Sam Elliott is in it.

Love Yellowstone . Keeps you on the edge of your chair. Every week I can hardly wait till next week. Each season finale means it’s painfully long till the next show. There’s so many ways things go girl you’re mine keeps trying to figure out where you’ll go from here. Definitely need to show to keep going. Thank you for Yellowstone.

I would have enjoyed the episodes of 1883 MUCH more if writers had cleaned up the language. I do not believe the “f” word was used as freely, if at all, during that time period. People had much more respect for others even in anger. It’s very sad that vocabulary has become so offensive. I wonder if it is a lack of knowledge, laziness to put less offensive words together or just the public’s lack of expectations that creators rely on to put films out. I would also like to see Yellowstone clean up their language by at least 50%.… Read more »

This show is captivating and keeps you interested throughout the whole episode. I absolutely love it. Thank you Mr. Sheridan for a job well done.

I wish the shows would come on early

It is not authentic, by 1883 all western trails, including the Oregon, seldom used except by the original builders (Native Americans), and the U.S. military. The railroads put them and ‘wagon trains’ out of business.
https://www.britannica.com/topic/Oregon-Trail