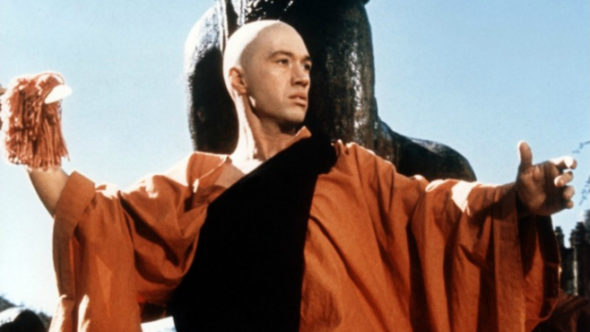 ABC isn’t the only network drawing inspiration from the ’70s. Deadline reports FOX has ordered a pilot based on the David Carradine series Kung Fu.

The original TV show began as one of ABC’s movies of the week in 1972. The subsequent action drama starred Carradine as Kwai Chang Caine, a martial arts expert who travels to the American West. The series ran for three seasons before ending in 1975.

FOX‘s Kung Fu reboot comes from mega-producer Greg Berlanti and Wendy Mericle. The project”follows the adventures of Lucy Chang, a Buddhist monk and kung fu master who travels through 1950s America armed only with her spiritual training and her martial arts skills as she searches for the man who stole her child years before.”

What do you think? Are you a fan of the original Kung Fu series? Would you watch the reboot?

I really enjoyed the original Carradine series back in the day. So I’ll admit to a bias, if the new show doesn’t compare well in production values. I bought into his introduction to the temple. I’d have to be sold on the reality of Lucy’s circumstances. And I anticipate Carradine getting at least a cameo at some point, if not a recurring role!

He died a few years ago, went out with a belt around his neck and uh, pants down. He ain’t making a cameo. But I already predict a fail. I’ve never heard of female Buddhist monks. Wish Hollywood would quit forcing square pegs in round holes just to check a box and say they’re progressive.

If they’re basing it directly on the original, better make that of Asian AND Caucasian descent.