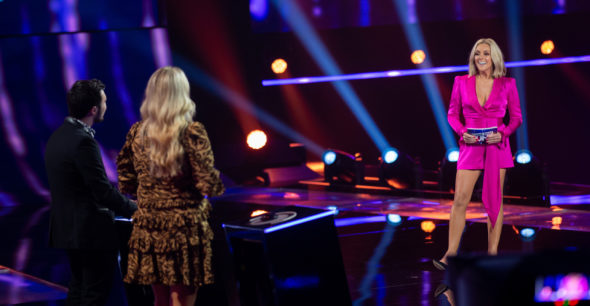 FOX is liking this song. The network has renewed the Name That Tune TV show for a second season.  New episodes will begin airing on Tuesday, March 29th.

A music game show, this newest iteration of the Name That Tune series is hosted by Jane Krakowski. The competition tests contestants’ music knowledge as they battle it out in an assortment of challenging musical games for cash and prizes. Each hour episode is comprised of two stand-alone half-hour contests. Two players play against each other as they race against the clock to test their knowledge of songs, performed by the live band that’s led by Randy Jackson. Each contest features a rotating variety of games from the original format, before the iconic Bid-a-Note round. The player with the most money at the end of Bid-a-Note wins the game and takes his or her bank into the Golden Medley bonus round. There, the player has a chance to win additional cash and potentially the $100,000 grand prize.

The first season of Name That Tune averaged a 0.59 rating in the 18-49 demographic and 2.68 million viewers. It was a middle-of-the-road performer in the ratings for FOX and ran for 10 episodes between January and March of 2021.

What do you think? Have you watched the newest version of the Name That Tune game show? Will you tune in for season two on FOX?

Absolutely love the game show, so glad it’s coming back.

Would love to see the return of my favorite game show! I was a contestant and a 5 day winner in 1974 when Dennis James hosted! Might suggest a segment that would feature a specific genre of music, i.e. early rock & roll, great American songbook, R&B, Disco, soul, etc. A “true Golden Medley” Thanks! -Ron Papile

So happy it is coming back

I totally miss the 1970’s “Name That Tune” with Denis James & Ralph Edwards Had the good fortune of appearing as a contestant and winning a 5 day streak! Always hoped for a revival where former contestants could pick a specific musical genre i.e. Great American Songbook, R&B, Soul, Disco, etc. Would love an opportunity to return as a new contestant!!!

Please renew this show. It’s light and fun the whole family can enjoy. I’ve asked several times if this was coming back for another season.