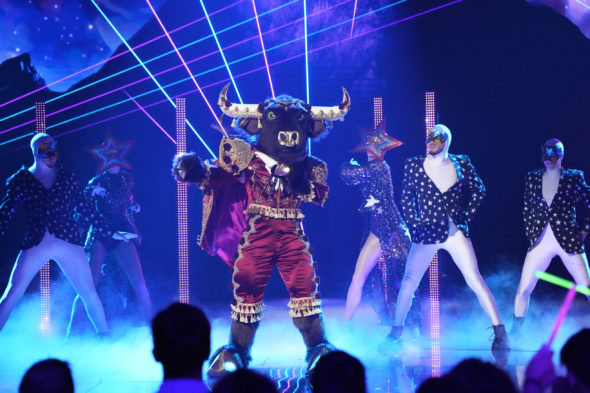 The costumers at FOX are going to be busy. The Masked Singer has been renewed for a seventh season on the network. New episodes will begin airing on Wednesday, March 9th.

The Masked Singer is hosted by Nick Cannon and features panelists Jenny McCarthy, Nicole Scherzinger, Ken Jeong, and Robin Thicke. The show features singing celebrities facing off against one another with one major twist — each contestant is covered from head to toe in an elaborate costume, complete with a full face mask to conceal his or her identity. With each performance, the host, panelists, audience, viewers — and even the other contestants — are left guessing who is singing behind the mask. The costumed characters in season six include Baby (WC), Banana Split, Beach Ball, Bull, Caterpillar, Cupcake, Dalmatian, Hamster, Jester, Mallard, Mother Nature, Octopus, Pepper, Queen of Hearts, and Skunk.

The sixth season of The Masked Singer averaged a 0.94 rating in the 18-49 demographic and 4.48 million viewers in the live+same day ratings (includes all DVR playback through 3:00 AM). Compared to season four (which aired in Fall 2020), that’s down by 45% in the demo and down by 33% in viewership. In the live+7 day delayed viewing, the competition picked up 43% in the demo and 36% in overall viewers, averaging a 1.35 and 6.11 million, respectively.

Check out our FOX status sheet to track the network’s new series pickups, renewals, and cancellations. You can find lists of cancelled shows here.
What do you think? Have you been watching The Masked Singer TV series on FOX? Are you glad to hear that it’s been renewed for a seventh season?

LOVE this show! The music is fantastic and it is so much fun to try to figure out who is under the mask as well as cheering on the good performances. The seasonal changes in the show keeps you interest in the show compared to “The Voice” which is the same every year.

I stopped after season 4. I just couldn’t watch it anymore. It was a fun show at first and then slowly became this joke of a competition. The Masked B-List Celeb Singer.