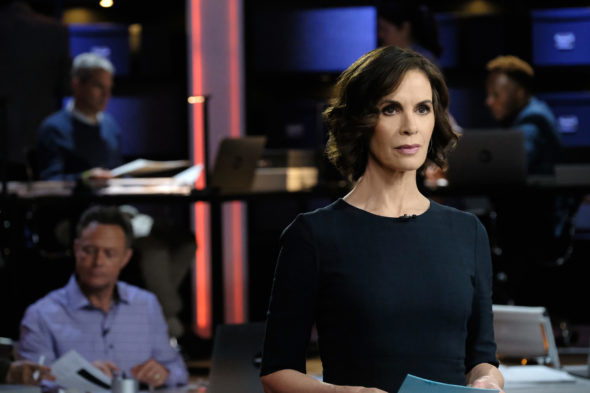 What new kinds of technology will help bring fugitives to justice? Has the America’s Most Wanted TV show been cancelled or renewed for a 27th season on FOX? The television vulture is watching all the latest cancellation and renewal news, so this page is the place to track the status of America’s Most Wanted, season 27. Bookmark it, or subscribe for the latest updates. Remember, the television vulture is watching your shows. Are you?

Airing on the FOX television network, the revival of America’s Most Wanted is hosted by journalist Elizabeth Vargas. Returning at a time when technology looms large in the public consciousness, Vargas breaks down some of the toughest cases from the show’s new headquarters and consults with a team of experts representing law enforcement units such as the FBI and U.S. Marshals. Deploying a myriad of advanced, modern-day developments in technology over the last several years, the series builds on its original format. Crimes are reenacted by utilizing new state-of-the-art crime-fighting technology that takes the audience hot-on-the-trail of suspects.

Will FOX cancel or renew America’s Most Wanted for season 27? This show ran on FOX for more than two decades before being dropped and was then picked up by Lifetime before it was cancelled. I suspect that the time is right for a network revival and that it will be renewed for another year on FOX. I’ll update this page with breaking developments. Subscribe for free alerts on America’s Most Wanted cancellation or renewal news.

What do you think? Do you hope that the America’s Most Wanted TV show will be renewed for a 27th season? How would you feel if FOX cancelled this TV series, instead?

WTH?! Why would this show NOT be on? I was looking forward to seeing all the cool new stuff. It’s my birthday tomorrow, so FOX please remove your head from your butt and bring this show back now. Thank you in advance. Sheesh!!

I wish they would bring back America Most Wanted as well as bringing back Walsh. He was very passionate about this show. I dont think Vargas was that good. She was more passionate on 20/20 than she is on America most Wanted.

This show did a spectacular job showcasing these criminals with new technologies. The avatars pinpointing physical features, location trackers and profilers insights are unmatched. There’s no other true crime tv show like it! I’ve learned so much in such a little amount of time. Please renew it! We need to stop these dangerous criminals.

Please bring America’s Most Wanted back. Being able to see the new technologies being used on the show, such as the avatars, especially the aging of the wanted criminal that has been on the run for years is truly amazing. I feel that if you don’t bring it back, law enforcement will lose a really great asset in crime solving. It’s also a great show, interesting and eye opening.

Wish they would too. And to bring back Walsh back as well. He was very passionate about this show. I dont think Vargas was that good. She was more passionate on 20/20 than she is on America most Wanted.

I hope FOX listens to the people and brings back America’s Most Wanted please. We really need to bring our people together to help stop all the ugly crimes. Thank You for hearing us
From Linda

This show is one of the best shows on tv now it is In limbo . What a shame it was the only show I watched the fox.

America’s Most Wanted needs to be renewed. It was successful in catching dangerous criminals in such a short time.

Love them new America’s Most Wanted. I think it’s is needed to catch criminals and anyone who is on the run from the law. Elizabeth Vargus is great on the show. Even though John Walsh is greatly missed.

I sure hope that AMW is renewed for many more seasons to come. I grew up with AMW years ago with John Walsh. Great show then and still an awesome show for the victims and law enforcement. Thanks.

I so agree with your statement.

This is ******** ! You mean the other pointless shows like The Simpsons, 911, and even The Masked Singer comes back and where the **** is America’s Most Wanted? Ugh I wish some of these other channels could see how important this show is and someone like CBS, ABC 7 or NBC if they don’t revive Unsolved Mysteries, or My 9, or even PIX 11 ! They can’t air worthless shows but the shows that make sense they cancel it ! Something tells me they cancelled AMW. I mean I haven’t heard from Elizabeth in a while from twitter and… Read more »

I can’t believe that after 5 episodes America’s Most Wanted may be cancelled! I am seriously hoping this new series returns, what a bummer to bring it back and then stop running a great show. There is a fan base, please give it more time for people to expand and rediscover this return series. Yes, we all miss John Walsh, but this new host is extremely good and really serious about catching these criminals. Love This Show♥️

I cant believe there was no announcement about either the 1st season of AMERICA’s MOST WANTED ending or no longer airing! And why cant we have both Elizabeth Vargas & John Walsh both host the show. His voice is what made this so exciting! Get the allstate guy too!!! We love this show!