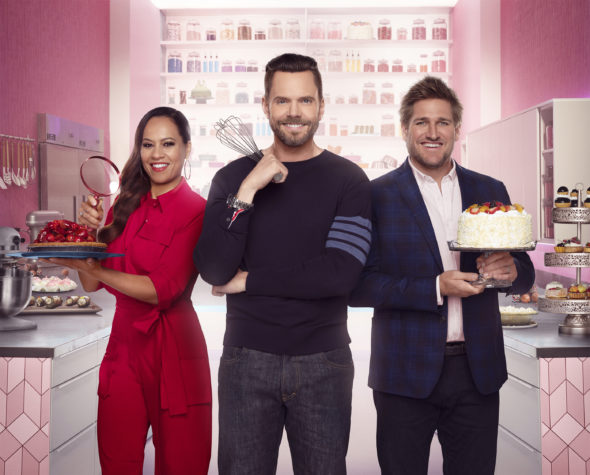 Each episode begins at the scene of the crime — a kitchen that was just used to make an amazing mouth-watering dessert that has since disappeared. The chef teams of two are challenged to scour the kitchen for clues and ingredients to figure out what was baked.

Next, each team must duplicate the recipe based on the clues and their best guess. The competing dessert makers will need to prove they have the technical know-how, imagination, and problem-solving skills needed to decode and re-create incredible desserts and cakes from across the world.

Celebrity judges will determine how closely their sweet treat matches the missing dessert — and how good it tastes. The winners will take a $100,000 prize.

Check out our FOX status sheet to track the network’s new series pickups, renewals, and cancellations. You can find lists of cancelled shows here.
What do you think? Do you like the Crime Scene Kitchen TV show? Do you think it should be cancelled or renewed for another season?

Watched the finale. WHY did they change the format? It went from matching EXACTLY to the clues to a cake decorating contest. Really?! It makes it totally obvious that they had a preferred contestant and wanted it to fix the show that way. Thomas was really, really good at the whole game. And Emma! Sorry, but leaning vs to thick to cut and raspberries not in the middle where they were supposed to be? Really? It’s obvious that they wanted to “fix” the show so that it appeared that their preferred contestants had a challenge. Of course they would win… Read more »