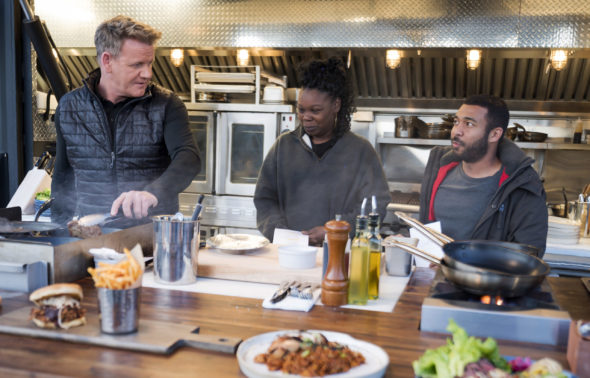 Gordon Ramsay’s 24 Hours to Hell and Back just wrapped its third season on FOX last night, but the series could already be preparing for its fourth season. Baltimore Business Journal reported that the Hell on Wheels used by Ramsay on the series has been seen outside an area filled with restaurants, and Ramsay was seen leaving one on Monday.

Baltimore Business Journal reported the following about the sighting:

“The sighting of Ramsay and his signature vehicle comes just days after Howard County posted a notice saying a “special event” would be happening in Ellicott City from Feb. 21 to Feb. 28 that would close Lot Das well as cause intermittent road closures, traffic disruptions and limited parking on Main Street.”

The network has not officially announced this show’s renewal as yet but, given Ramsay’s long relationship with the network, it’s looking likely that Gordon Ramsay’s 24 Hours to Hell and Back will return for a fourth season.

What do you think? Are you a fan of Gordon Ramsay’s 24 Hours to Hell and Back? Do you want to see Ramsay help more people turn their restaurants around?

Yes, please let the show return for another season… and another. A girl can never watch too much Gordon Ramsay.

This show is so phoney. The update blogs show most of the places have good reviews before the makeover. Why do it? Because it Looks bad if they close up after reno. Most are doing it for a free makeover and pr. Plus supposedly they have been secretly filming for a week to see all the nasty stuff. They have a highlight reel all set up for everybody to see. If the food is that poisonous and deadly then why did he eat it and bring in other guests like old ladies to risk their life? Ever notice how few… Read more »

So, why bother typing a story no-one reads? ( I didn’t by the way ) – and if you don’t like it, don’t watch it ……. get a friend and find something in common to watch bud

All Gordon’s shows are great. I love 24 Hours of Hell but I can’t wait for the new season of Hell’s Kitchen

Agreed. And I wish Kitchen Nightmares would come back.

I watch all of Gordon’s shows, happy to hear season 4 is in production

Gordon Ramsay has the best TV shows….. I really hope to see another season of “Hell and back” soon