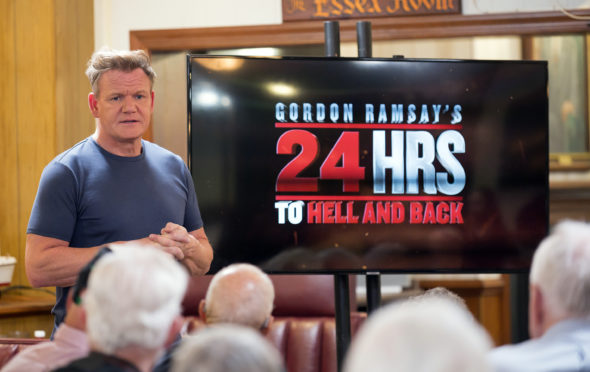 Chef Gordon Ramsay has been a staple of primetime for many years and he currently has four different TV series on FOX. His newer series, Gordon Ramsay’s 24 Hours to Hell and Back, has returned for a third season after more than a year away. Have viewers forgotten about it? Will it be cancelled or renewed for season four? Stay tuned.

A FOX restaurant rehab reality TV series, Gordon Ramsay’s 24 Hours to Hell and Back is a new twist on the old Kitchen Nightmares format. Salty Chef Ramsay rides to the rescue in his custom, mobile “Hell on Wheels” command-center (equipped with a full kitchen) and assesses what ails a flagging eatery. In just 24 hours’ time, Ramsay and his team renovate the restaurant, refresh its menu, and help the owners relaunch it.

For comparisons: Season two of Gordon Ramsay’s 24 Hours to Hell and Back on FOX averaged a 1.04 rating in the 18-49 demographic and 3.47 million viewers.

What do you think? Do you like the Gordon Ramsay’s 24 Hours to Hell and Back TV series on FOX? Should it be cancelled or renewed for a fourth season?

At 82, I have never sent a fan message before, till now, I am a great fan of Chef Ramsey, and wish him all the best this world has to offer. My only wish is someday he might visit the Northeast, so I could meet him in person. From The Beautiful Berkshires, GOD BLESS.

LOVE Gordon Ramsey!! All or any of his shoes are amazing!!

Looks as if they’re filming for another season already. Seems like it’s all but renewed