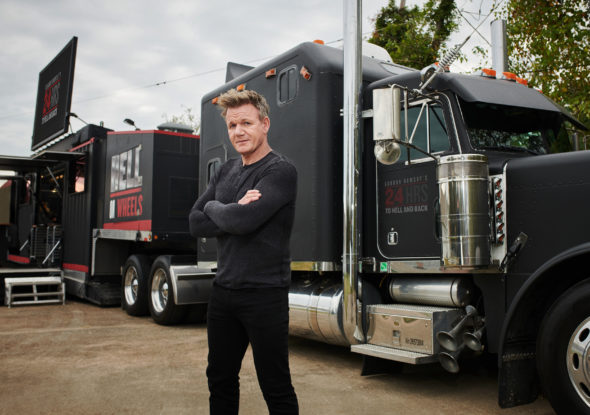 TV show description:
Gordon Ramsay’s 24 Hours to Hell and Back TV show is a new twist on the salty chef’s series, Kitchen Nightmares. In the new restaurant rescue and relaunch program, Chef Ramsay travels cross country in “Hell On Wheels,” his mobile command center which includes, of course, a state-of-the-art kitchen.

Gordon and his team are riding to the rescue to help restaurateurs right their sinking ships. The action begins when an undercover team records secret surveillance footage of a business, after which Ramsay visits in person, to personally inspect those problems plaguing these eateries.

In just 24 hours, Ramsay and company renovate the restaurant kitchens and dining rooms, refresh the menus, and try to set up the proprietors for future success. At the end of the allotted time, they stage a grand re-opening, for the public.

What do you think? Do you like Gordon Ramsay’s 24 Hours to Hell and Back TV series? Should this FOX TV show be cancelled or renewed for another season?

I really enjoy watching the show, and glad that I never ate at the restaurants; before they were cleaned, revived, and rescued. I am sending this comment mainly because I’d really really like Chef Ramsey and producers to consider contacting The Cliff House in Folsom, CA. It has a beautiful location on upper lake/river area below Folsom Lake Dam. It has changed hands and names a few times then back to the Cliff House. The service on the deck sucks and bar server staff are below Std. Food and drinks are awful with aging exterior and interior, with a great… Read more »

Another great show by Gordon Ramsay. Good family entertainmnet that can educate those wanting a successful restaurant or any king of business. Great show, thank you for keeping it on the air!!