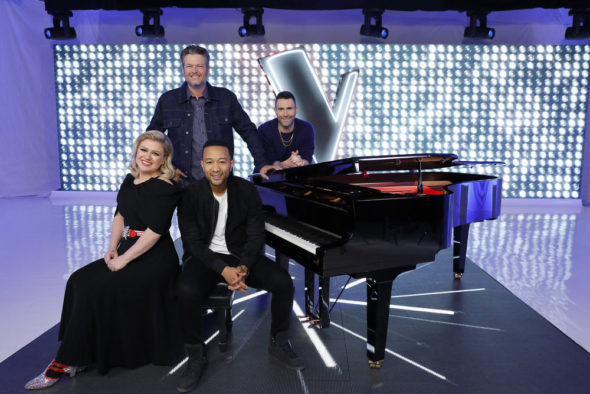 Is it time for a big finish? Has The Voice TV show been cancelled or renewed for a 17th season on NBC? The television vulture is watching all the latest cancellation and renewal news, so this page is the place to track the status of The Voice season 16. Bookmark it, or subscribe for the latest updates. Remember, the television vulture is watching your shows. Are you?

Hosted by Carson Daly, The Voice TV show is a singing competition. It typically airs twice weekly on NBC — on Monday and Tuesday nights. In the 16th cycle, John Legend joins returning coaches Kelly Clarkson, Adam Levine and Blake Shelton. The competition is divided into five stages: blind auditions, battle rounds, knockouts, playoffs, and live performances. For season 16, the coaches have enlisted music industry heavyweights to prepare their artists for the battle rounds. Legend teams up with Khalid; Clarkson with Kelsea Ballerini; Levine with Charlie Puth; and Blake Shelton with Brooks and Dunn.

The Monday editions of the 16th season of The Voice averaged a 1.50 rating in the 18-49 year old demographic and 8.67 million viewers. Compared to the Monday episodes of the Spring 2018 cycle, that’s down by 23% in the demo and down by 13% in viewership, respectively.

The Tuesday editions of the 16th season of The Voice averaged a 1.22 rating in the 18-49 year old demographic and 8.07 million viewers. Compared to the Tuesday episodes of the Spring 2018 cycle, that’s down by 28% in the demo and down by 11% in viewership. Find out how The Voice stacks up against other NBC TV shows.

Will NBC cancel or renew The Voice for season 17? This series remains the peacock network’s big show so there’s no way they’ll be cancelling it anytime soon. I’ll update this page with breaking developments. Subscribe for free alerts on The Voice cancellation or renewal news.

What do you think? Are you happy The Voice TV series has been renewed for a 17th season? How would you feel if NBC had cancelled this TV show, instead?

I’ve only watched the Gwen Stefani seasons and they have been great. She’s so cute and positive and really funny. The rest of the season’s I’ll tune in for Blake’s performances and skits only. Adam has been checked out forever, so good he’s gone. Kelly seems nice but is annoying and John is boring.

My husband and me love LA Finest!!! I would love another season or two!!!!

Please cancel this show. It’s brainless and pointless. Not a single winner has been heard of outside of the last episode of the season they were on. None of them have ever cracked the Billboard top 20 in anything and none have won any awards. It’s just a vehicle for the musicians hired to be the bobble heads or what the show calls “coaches”. It shocks me as to how many people watch this.

Been watching The Voice since it started.
I enjoy the interaction of the Judges.
However, now that Adem is moving on to other things I’ll miss his rants with Blake. Not sure how it will go with Gwen coming back? May get to Lovie dovey for me again. Will have to wait and see? Good luck with your new show Adem( will check out Songland though.