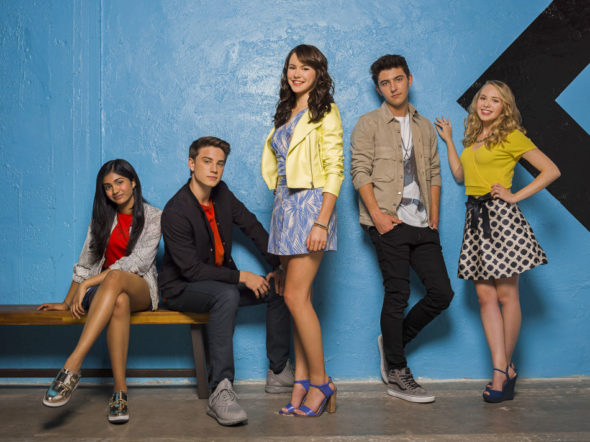 TV show description:
An English language adaptation of Nick’s Columbian comedy-drama, Yo Soy Franky, the I Am Frankie TV show centers on android Frankie Gaines (Hook). Although she looks like an ordinary teenaged girl, Frankie is actually a sophisticated computer. She is fully equipped with internet access and huge stores of memory.

In order not to participate in their evil schemes, Frankie flees the EGG tech company and masquerades as an everyday high school student. She soon becomes fast friends with Dayton (Nelson) and dives into the world of homework and crushes, while struggling to keep her origins a secret.

When Frankie makes a stunning win in a math contest, she arouses the suspicions of the popular clique, including Tammy Krishnan), Lucia (Baldesco) and Makayla (Beckett). To make matters worse, human emotions begin to wreak havoc on Frankie’s wiring and further complicate her cover.

Will Frankie be able to live the life of the average teen and maintain her secret identity? Stay tuned.

Series Finale:
Episode #40 — I Am… Changed
While Frankie is prepped to work on Cole, Rachel uses Jenny’s app to control Beto at WARPA; Andrew, Simone and Kingston team up to escape and save the others; Frankie and Cole share a special moment.
First aired: October 4, 2018.

What do you think? Do you like the I Am Frankie TV series? Should this TV show have been cancelled or renewed for a third season on Nickelodeon?

I loved the TV series I am Frankie, it was one of the very few things that my 12 year old son and I can see, and we couldn’t wait for the next one, … Please bring it back.

Bring back the show

Plz bring back the show

I also think the show I am Frankie must have a a lot of draws when I found out the show was cancelled I was furious and I love this show too much so please make more seasons.