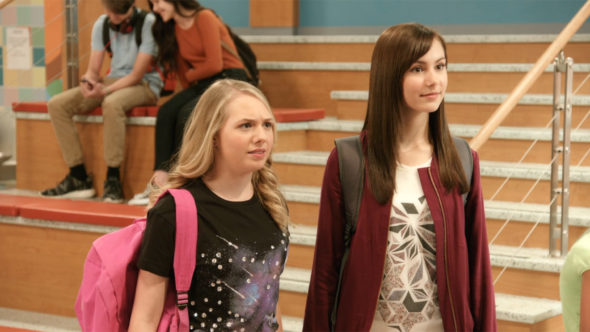 I Am Frankie is coming back soon. Today, Nickelodeon announced the TV show’s second season will debut in September.

Season two of I Am Frankie premieres on Nickelodeon on September 10th at 8 p.m. ET/PT.

NEW YORK–Aug. 8, 2018–Nickelodeon’s serialized live-action show I Am Frankie returns on Monday, Sept. 10, at 8:00 p.m. (ET/PT), continuing the story of Frankie Gaines (Alex Hook), a cutting-edge, experimental android who looks like any other human girl, but harbors a big secret–she functions as a high-tech computer with internet access, extensive memory and more. I Am Frankie will air Monday -Friday at 8:00 p.m. (ET/PT) on Nickelodeon. The series will air globally across Nickelodeon’s channels and branded blocks in 170+ countries and territories.

In season two, Frankie has finally acclimated to teenage life at Sepulveda High with the help of her best friend Dayton (Nicole Alyse Nelson) and their tight-knit group of loyal confidantes. However, things quickly become complicated when a new android arrives at the school, and the world finally learns that androids exist, and the military company, WARPA (Weaponized Android Research Project Agency), returns with a new threat. Throughout the season, Frankie aims to keep her true identity a secret, while protecting her family and friends and attempting to live a normal life.

Ahead of its season two debut, Nickelodeon will air a one-hour I Am Frankie special on Saturday, Aug. 11 at 8:00 p.m. (ET/PT), where Frankie goes head-to-head with Eliza, another android who has been out on her own and wreaking havoc on the world, in the ultimate android showdown.

What do you think? Do your kids watch I Am Frankie? Will they watch the new season?

I want tell all team what worked on this series made a great job im very impresed im not offten say that becuase last time i saw a good series tv was in year 1998. Since then wen i saw all series i analisyed on tv no have noting orginal somntig who no take ideas from others seried snr combine and make think we no notice but some ppl what apreciate art work make a series see this wen someone combine many ideeas with his orginal idea. A seried must stay orginal stile.From mistake on saturday i opened tv and… Read more »

yes I will be watching I Am Frankie Season 2. Enjoyed Season 1