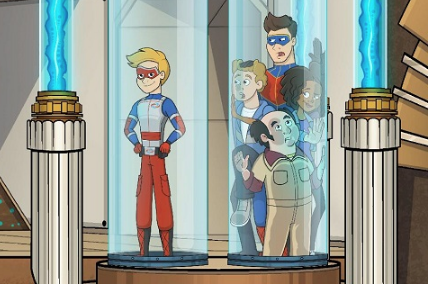 Kid Danger is back in action. Recently, Nickelodeon announced their new TV show The Adventures of Kid Danger will premiere in January.

Based on Henry Danger, the animated series “follows the heroic Kid Danger and Captain Man as they embark on brave new adventures – battling bizarre criminals and super villains with their sharp wit and amazing crime-fighting skills.”

The Adventures of Kid Danger premieres on Nickelodeon on January 19th at 6:30 p.m. ET/PT.

BURBANK, Calif.–Dec. 14, 2017– Henry Hart’s animated exploits as Kid Danger will unfold in Nickelodeon’s newest series, The Adventures of Kid Danger, premiering Friday, Jan. 19, at 6:30 p.m. (ET/PT). The 10-episode series follows the heroic Kid Danger and Captain Man as they embark on brave new adventures – battling bizarre criminals and super villains with their sharp wit and amazing crime-fighting skills. New episodes will continue to air in its regular timeslot on Fridays at 6:30 p.m. (ET/PT) on Nickelodeon.

The half-hour animated series, based on characters from TV’s number one kids’ series Henry Danger, will reveal brand-new areas of the superheroes’ headquarters for the first time, including the Man Cave tube system, which propels the crime fighters into adventure; and the Man Hanger, filled with crime-fighting vehicles and gadgets used on missions.

In the series premiere, “Popcorn Monster,” when Ray and Henry’s cloning experiment to create two identical pieces of popcorn accidentally creates the Popcorn Monster, it’s up to Captain Man and Kid Danger to take it down. Next in “Game of Drones,” Ray says he doesn’t want to enter the Swellview Drone Dash because Dr. Minyak always wins, so Schwoz hatches a plan to shrink Kid Danger and have him pilot his own drone.

From Jan. 5-Jan. 13, “Popcorn Monster”/”Game of Drones” will be available on the Nick App and Nick.com, for download on iOS, Apple TV, Amazon Fire TV, Roku, Android, Android TV and Nick On Demand. The episode will also be available for purchase on iTunes, Amazon, Google Play, Vudu, Xbox and PlayStation.

Fans can catch a sneak peek of The Adventures of Kid Danger on Monday, Jan. 15, at 7:30 p.m. (ET/PT). Prior to the episode, viewers can watch a brand-new Henry Danger episode at 7:00 p.m. (ET/PT). In “Toon In for Danger,” when Henry and Ray get a copy of the new Kid Danger and Captain Man cartoon and see that there’s trouble, they must hurry to fix the cartoon before the big premiere party. Olympian Shaun White guest stars as himself.

Visit Nick.com, Facebook, Instagram and the Nick App to learn more about The Adventures of Kid Danger.

The Henry Danger Crime Warp mobile app, available now on iOS and Android devices, has The Game Shakers and Henry Danger joining forces to defeat Time Jerker and his evil allies in this new non-stop dash. Players can play as Kid Danger or Captain Man to beat Swellview’s bad guys.

The Adventures of Kid Danger is created and executive produced by hitmaker Dan Schneider (Henry Danger, Game Shakers, iCarly) and produced by Powerhouse Animation, which also produced the short-form series.”

What do you think? Are you familiar with Henry Danger? Will you watch The Adventures of Kid Danger?

I am going to watch the new show I liked the other HenryDanger a lot.