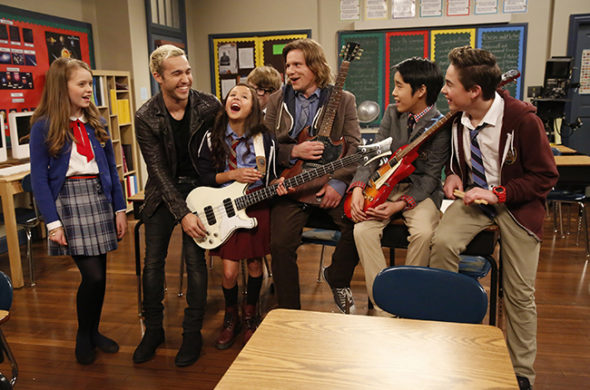 It looks like class is cancelled. Deadline reports Nickelodeon has cancelled School of Rock after three seasons.

The remaining episodes of School of Rock‘s third season will continue to air through 2018. Today, Nickelodeon also announced they have cancelled Nicky, Ricky, Dicky and Dawn.

Nickelodeon is not moving forward with production on Nicky, Ricky, Dicky & Dawn and School of Rock. We are extremely proud of each series and thankful to the casts and crews for their work. The remaining episodes for both shows will continue to air on Nickelodeon through 2018.”

What do you think? Have you seen School of Rock? Are you sad the show is coming to an end?

Are they in love with each other

They were inn love and that was revealed in the last 2 episodes.

so sad to see such a great series end…

this is not logical , this was one of the best series on kids television unlike some hogwash like star falls or the thundermans ,cmon this was not supposed to happen

I’m so sad it’s canceled tho. I was really wanting for from Fremmer and I loved that show so much.

Someday I hope they will do “School Of Rock Pt II”

This was one of the best shows by an kids networks ever, a lot less annoying than most of the other kids sitcoms and actually had some original story lines and had some music parents could dig and sing along to. What a total bummer it is over! Maybe they could consider bringing it back! Please??!! The kids are super talented. Rock on Nickelodeon. #RockOn

What a sad way to end the show with so much potential, comming back from the festival in there last episode and revealing themselves as “School of Rock” could lead to some really good content for a fourth season. Especially with there principal who had said she could have been fired do to her ignorence of the band right under her nose, if she would have punished the students she would have found herself in a ditch, thus allowing School of Rock to continue and be know for who they are as members of the band.

I love School Of Rock!!! That amazing series should continue! Why Nickelodeon cancelled it?