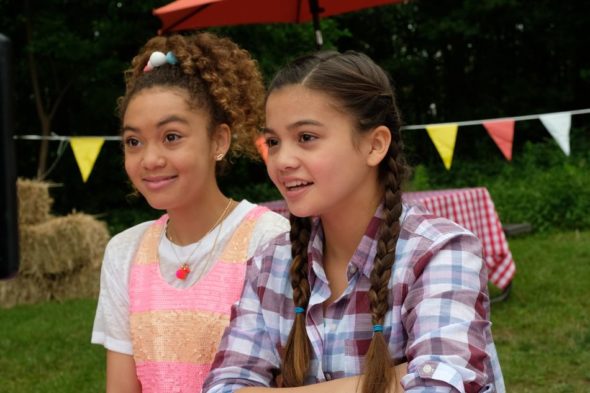 What’s written in the stars for Beth, Craig, and their kids? Has the Star Falls TV show been cancelled or renewed for a second season on Nickelodeon? The television vulture is watching all the latest cancellation and renewal news, so this page is the place to track the status of Star Falls, season two. Bookmark it, or subscribe for the latest updates. Remember, the television vulture is watching your shows. Are you?

The first season of Star Falls is averaging a 0.09 rating in the 18-49 demographic with 376,000 viewers. (For kids’ programming, the 18-49 demo obviously isn’t as relevant as the total viewer numbers. However, we’re including them so one could compare this show’s numbers with programs on the major networks and other cable channels.) Learn how Star Falls stacks up against other Nickelodeon TV shows.

Will Nickelodeon cancel or renew Star Falls for season two? The show drew lower numbers than some of the channel’s other scripted series. That’s not a good sign but the series could still be renewed. I’ll update this page with breaking developments. Subscribe for free Star Falls cancellation or renewal alerts.

What do you think? Do you hope the Star Falls TV show will be renewed for a second season? How would you feel if Nickelodeon cancelled this TV series, instead?

One of the VERY few children’s shows that don’t treat children like total idiots.

The viewers for the two recent episodes that aired August 5, 2018 was 0.14 million and 0.10 million respectively that’s lowest rated episodes for this series. I don’t remember any series on Nickelodeon that had low number in viewers or ratings. If Nickelodeon sees these numbers they might cancel the series. It looks like no one is watching Nickelodeon now since School of Rock ended on April 8, the Thundermans ended on May 25 and Nicky, Ricky, Dicky and Dawn just ended on August 4, Game Shakers ending soon, Knight Squad returning with date unknown, Henry Danger has not shown… Read more »