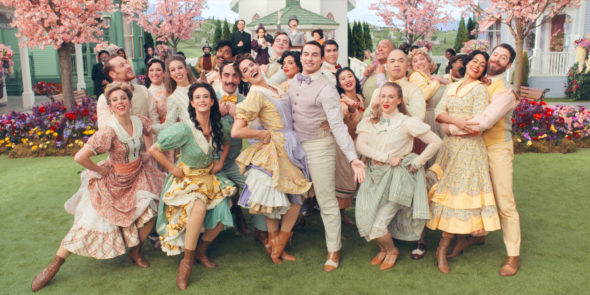 What’s the next musical number? Has the Schmigadoon! TV show been cancelled or renewed for a second season on Apple TV+? The television vulture is watching all the latest cancellation and renewal news, so this page is the place to track the status of Schmigadoon!, season two. Bookmark it, or subscribe for the latest updates. Remember, the television vulture is watching your shows. Are you?

Streaming on the Apple TV+ subscription service, the Schmigadoon! TV show is a parody of iconic Golden Age musicals. It stars Cecily Strong, Keegan-Michael Key, Alan Cumming, Kristin Chenoweth, Aaron Tveit, Dove Cameron, Ariana DeBose, Fred Armisen, Jaime Camil, Jane Krakowski, and Ann Harada, with guest Martin Short. The story follows a pair of New York City doctors, Melissa Gimble (Strong) and Josh Skinner (Key). Their romance begins after a vending machine malfunctions and gives them all of its candy contents. But, over time, their relationship grows stale and they go on a retreat to rediscover their spark. While on a backpacking trip in the woods, they become lost and happen upon a stone bridge. They cross the bridge and find themselves in a seemingly idyllic town called Schmigadoon, where everyone acts, sings, and dances like they’re in a classic 1940s musical. The next morning, when they try to depart the magical town, a leprechaun (Short) tells Melissa and Josh that they cannot leave until they find true love.

Unless they decide to publicize viewership, it is difficult to predict whether Apple TV+ will cancel or renew Schmigadoon! for season two. Since Apple TV+ isn’t ad-supported, it can take a chance on series it believes in but sooner or later it comes down to production costs, versus viewership numbers. This feels like a mini-series yet Apple hasn’t indicated that there won’t be a second season. I’m leaning toward a renewal. I’ll keep my ears open and an eye out for news, and will update this page with breaking developments. Subscribe for free alerts on Schmigadoon! cancellation or renewal news.

6/11/22 update: Schmigadoon! has been renewed for a second season on Apple TV+.

What do you think? Are you glad that the Schmigadoon! TV show has been renewed for a second season? How would you feel if Apple TV+ had cancelled this TV series, instead?

Don’t cancel!! Let’s keep this going for another season! It’s lovely to have ‘theater’ while we’re dealing with the possibly of Covid variants getting to even vaccinated people. Schmiggadoon! should continue as both a gift and a distraction at this crazy time!!