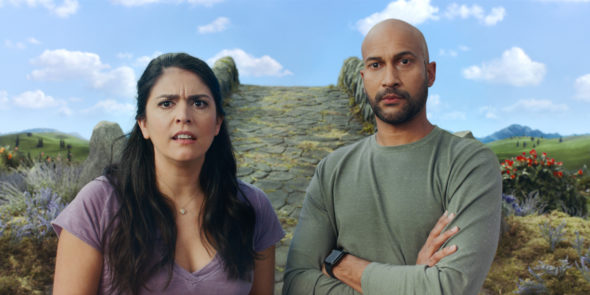 Grab your dancing shoes, the next musical number is coming. Apple TV+ has renewed the Schmigadoon! series for a second season. Tituss Burgess and Patrick Page are joining the cast. The first season of six episodes was released last summer.

A parody of iconic Golden Age musicals, the first season of the Schmigadoon! TV show stars Cecily Strong, Keegan-Michael Key, Alan Cumming, Kristin Chenoweth, Aaron Tveit, Dove Cameron, Ariana DeBose, Fred Armisen, Jaime Camil, Jane Krakowski, Ann Harada, and Martin Short. The story follows a pair of New York City doctors, Melissa Gimble (Strong) and Josh Skinner (Key). Their romance begins after a vending machine malfunctions and gives them all of its candy contents. But, over time, their relationship grows stale and they go on a retreat to rediscover their spark. While on a backpacking trip in the woods, they become lost and happen upon a stone bridge. They cross the bridge and find themselves in a seemingly idyllic town called Schmigadoon, where everyone acts, sings, and dances like they’re in a classic 1940s musical. The next morning, when they try to depart the magical town, a leprechaun (Short) tells Melissa and Josh that they cannot leave until they find true love.

Having found true love in the town of Schmigadoon, season two of “Schmigadoon!” will find Josh (Key) and Melissa (Strong) in Schmicago, the world of ’60s and ’70s musicals.

Following its global debut on Apple TV+ last year, “Schmigadoon!” was honored with an AFI Award, and has received wide acclaim and accolades, including a Critics Choice Award nomination for Best Supporting Actress for star Kristin Chenoweth.

The complete first season of “Schmigadoon!” is now streaming on Apple TV+.

Season two of “Schmigadoon!” will join an expanding offering of global hit Apple Originals recently renewed for a second season, including “Severance,” “Pachinko,” “The Afterparty” and “Slow Horses,” as well as award-winning comedies “Ted Lasso,” “Mythic Quest,” “Dickinson” and more.

Apple TV+ offers premium, compelling drama and comedy series, feature films, groundbreaking documentaries, and kids and family entertainment, and is available to watch across all your favorite screens. After its launch on November 1, 2019, Apple TV+ became the first all-original streaming service to launch around the world, and has premiered more original hits and received more award recognitions faster than any other streaming service in its debut. To date, Apple Original films, documentaries and series have earned 245 wins and 963 award nominations, including this year’s Oscar Best Picture winner “CODA.”

What do you think? Have you watched the Schmigadoon! TV series on Apple TV+? Are you glad to hear that it’s been renewed for a second season?