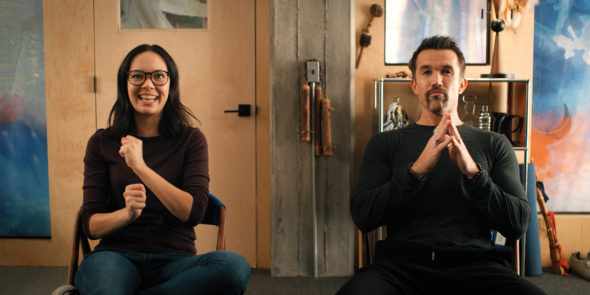 Let the game go on! Apple TV+ has renewed the Mythic Quest TV show for third and fourth seasons. The second season of this workplace comedy series finished airing on June 25th and season three will be released sometime next year.

Here’s the renewal press release from Apple TV+, as well as a comedic announcement video:

Apple TV+ today announced a season three and four pick-up of “Mythic Quest,” the hit sitcom from creators Rob McElhenney, Charlie Day and Megan Ganz, which has been hailed by critics as “hilarious and endearing,” “a ton of fun,” and “the best workplace comedy on TV.” McElhenney, who also stars, shared the news in his signature comedic style with a video featuring fellow Apple TV+ star and Emmy Award-winner Jason Sudeikis (“Ted Lasso”), and Academy Award-winner Sir Anthony Hopkins, who recently earned a Primetime Emmy Award nomination for Outstanding Narrator for his guest star role in the “Mythic Quest” special, “Everlight.” Boasting a 100% Certified Fresh score on Rotten Tomatoes, the series is set to open the writers’ room for season three later this year.

“Just like critics and audiences all over the world, we fell in love with Rob and his team’s sharp writing and full-of-heart, relatable characters that make up the world of ‘Mythic Quest,’” said Matt Cherniss, head of programming for Apple TV+. “We can’t wait for viewers to see what’s in store in the upcoming seasons of this brilliant workplace comedy.”

Apple TV+ is available to watch across all your favorite screens. After its launch on November 1, 2019, Apple TV+ became the first all-original streaming service to launch around the world, and has premiered more original hits and received more award recognitions faster than any other streaming service in its debut. To date, Apple Original films, documentaries and series have been honored with 155 wins and 534 awards nominations.

Apple TV+ is available on the Apple TV app in over 100 countries and regions, on over 1 billion screens, including iPhone, iPad, Apple TV, iPod touch, Mac, select Samsung, LG, Sony and VIZIO smart TVs, Amazon Fire TV and Roku devices, Chromecast with Google TV, PlayStation and Xbox consoles, and at tv.apple.com, for $4.99 per month with a seven-day free trial. For a limited time, customers who purchase a new iPhone, iPad, Apple TV, Mac or iPod touch can enjoy one year of Apple TV+ for free. This special offer is good for three months after the first activation of the eligible device.

What do you think? Have you watched Mythic Quest on the Apple TV+ streaming service? Are you glad that it’s been renewed for seasons three and four?