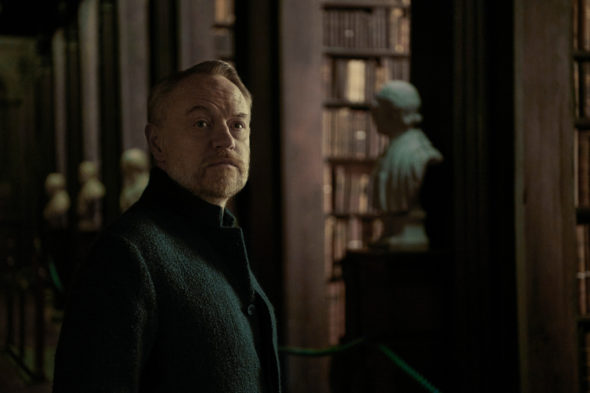 Will viewers get to see the whole story? Has the Foundation TV show been cancelled or renewed for a second season on Apple TV+? The television vulture is watching all the latest cancellation and renewal news, so this page is the place to track the status of Foundation, season two. Bookmark it, or subscribe for the latest updates. Remember, the television vulture is watching your shows. Are you?

Streaming on the Apple TV+ subscription service, the Foundation TV show is based on Isaac Asimov’s book trilogy of the same name. It stars Jared Harris, Lee Pace, Lou Llobell, Leah Harvey, Laura Birn, Cassian Bilton, Terrence Mann, and Alfred Enoch. When revolutionary Dr. Hari Seldon (Harris) predicts the impending fall of the Galactic Empire, he and a band of loyal followers venture to the far reaches of the galaxy. Their goal is to establish The Foundation in an attempt to rebuild and preserve the future of civilization. Enraged by Hari’s claims, the ruling Cleons — a long line of emperor clones — fear their unrivaled reign may be weakening as they’re forced to reckon with the potential reality of losing their powerful legacy forever.

Unless they decide to publicize viewership, it is difficult to predict whether Apple TV+ will cancel or renew Foundation for season two. Since Apple TV+ isn’t ad-supported, it can take a chance on series it believes in but sooner or later it comes down to production costs, versus viewership numbers. Given that this show is based on a well-known and beloved series of books, I believe that Apple will complete this saga. I’ll keep my ears open and an eye out for news, and will update this page with breaking developments. Subscribe for free alerts on Foundation cancellation or renewal news.

What do you think? Are you glad that the Foundation TV show has been renewed for a second season? How would you feel if Apple TV+ had cancelled this TV series, instead?