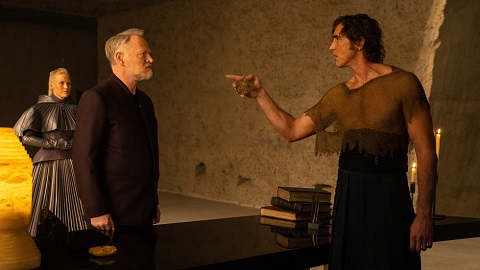 Foundation is adding 10 actors to its cast for its second season. Apple TV+ has revealed the names of the additions and the roles they will play, along with the first photo for season two. Starring Jared Harris, Lee Pace, Laura Birn, Terrence Mann, and Cassian Bilton, the sci-fi series is based on stories by Isaac Asimov and revolves around “a band of exiles who discover that the only way to save the Galactic Empire from destruction is to defy it.”

Apple TV+ revealed more about the additions in a press release.

“Apple TV+ today shared a first look at the highly anticipated second season of Foundation, the epic saga from storyteller David S. Goyer and produced for Apple by Skydance Television, and revealed new cast that will star alongside Emmy Award nominees Jared Harris and Lee Pace in the new season.

Based on Isaac Asimov’s award-winning stories, and featuring an international cast led by Harris and Pace, alongside rising stars Lou Llobell and Leah Harvey, the monumental adaptation of Foundation chronicles the stories of four crucial individuals transcending space and time as they overcome deadly crises, shifting loyalties and complicated relationships that will ultimately determine the fate of humanity. The Apple Original drama also stars Laura Birn, Terrence Mann and Cassian Bilton.

New stars joining the cast of Foundation for season two include:

· Isabella Laughland as ‘Brother Constant,’ a cheerfully confident claric whose job is to evangelize the Church of the Galactic Spirit across the Outer Reach. Constant is a true believer, whose courage and passion make her hard not to love.

· Kulvinder Ghir as ‘Poly Verisof,’ High Claric of the Church of the Galactic Spirit. Whip-smart and sardonic, he’s also a terrible drunk — intelligent enough to see the path he’s on, but too cynical to change.

· Sandra Yi Sencindiver as ‘Enjoiner Rue,’ the beautiful, politically savvy consigliere to Queen Sareth. A former courtesan to Cleon the 16th, Rue parlayed her status to become a royal counsellor.

· Ella-Rae Smith as ‘Queen Sareth’ of Cloud Dominion. Used to being underestimated, Sareth employs it to her advantage, charming her way into the Imperial Palace with biting wit, all while on a secret quest for revenge.

· Dimitri Leonidas as ‘Hober Mallow,’ a master trader with a sarcastic personality and questionable morals, who is summoned against his will to serve a higher, selfless cause.

· Ben Daniels as ‘Bel Roise,’ the last great general of the Superliminal Fleet and would-be conqueror of the Foundation. Bel is noble to a fault, but his fealty to the Galactic Empire is waning.

· Holt McCallany as ‘Warden Jaegger Fount,’ the current Warden of Terminus and guardian of its citizens against external threats.

· Mikael Persbrandt as ‘The Warlord of Kalgan,’ a monster of a man, coiled with muscle and possessing powerful psychic abilities, and fueled by hate in his quest to take over the galaxy.

· Rachel House as ‘Tellem Bond,’ mysterious leader of the Mentallics.

“Foundation: The Official Podcast,” a companion podcast to the drama series, is produced by Pineapple Street Studios with Max Linsky, Jenna Weiss-Berman and Bari Finkel serving as executive producers, with the entire first season now available on Apple Podcasts at https://apple.co/FoundationPodcast.”

A premiere date for season two has not been announced yet.

What do you think? Are you looking forward to the return of Foundation on Apple TV+?

” at the highly anticipated second season of Foundation” anticipated by who? first season was mediocre and hardly had any engagements anywhere online. who exactly is anticipating this highly?