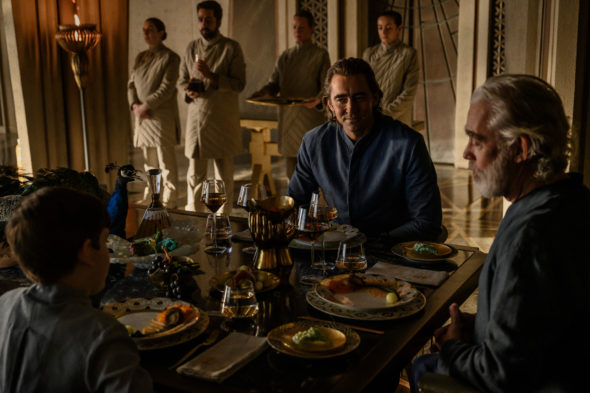 TV show description:
A science-fiction drama series, the Foundation TV show is based on Isaac Asimov’s book trilogy of the same name. It was originally published as a series of short stories in Astounding Magazine in 1942-50. The story follows a band of exiles who discover that the only way to save the Galactic Empire from destruction is to defy it.

When revolutionary Dr. Hari Seldon (Harris) predicts the impending fall of the Galactic Empire, he and a band of loyal followers venture to the far reaches of the galaxy. Their goal is to establish The Foundation in an attempt to rebuild and preserve the future of civilization.

Enraged by Hari’s claims, the ruling Cleons — a long line of emperor clones — fear their unrivaled reign may be weakening as they’re forced to reckon with the potential reality of losing their powerful legacy forever.

The series chronicles the stories of four crucial individuals transcending space and time as they overcome deadly crises, shifting loyalties, and complicated relationships that will ultimately determine the fate of humanity.

What do you think? Do you like the Foundation TV show? Do you think it should be cancelled or renewed for another season?

This is not the Foundation story.