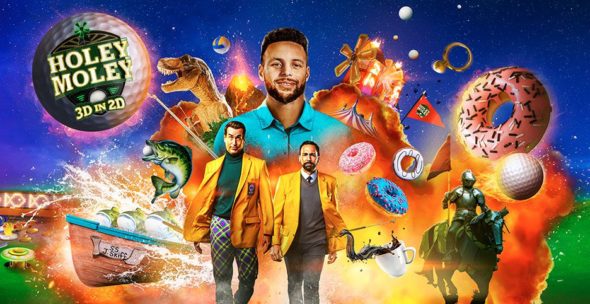 We don’t have to wonder if Holey Moley will be cancelled by ABC this time around since the game show has already been renewed for a fourth season. In year two, the series’ live+same day audience actually grew — a rarity these days as more and more viewers switch to streaming and delayed viewing. Will the traditional ratings continue to grow this season?  Stay tuned.

The third season of Holey Moley (aka Holey Moley 3D in 2D) features self-proclaimed mini-golf lovers from around the country as they compete head-to-head through an obstacle-filled golf course. In each episode, contestants put their miniature golf and physical skills to the test as they face off in crazy challenges on the supersized course. Returning are on-camera color commentators Rob Riggle and Joe Tessitore, sideline correspondent Jeannie Mai as well as executive producer and resident golf pro Stephen Curry. In season three, mini-golf enthusiasts and talented putters of all ages test their luck on the “Holey Moley” course in an attempt to be crowned winner and walk away with “The Golden Putter” trophy and coveted plaid jacket. Winners from each episode will return to the course for the season finale and putt for their chance at the big cash prize.

9/24 update: You can see the latest night’s ratings in context.

For comparisons: Season two of Holey Moley on ABC averaged a 0.60 rating in the 18-49 demographic and 3.35 million viewers.

What do you think? Do you like the Holey Moley TV series on ABC? Should it be cancelled or renewed for a fourth season?

I Love the Show! Maybe no more Joe though. ******* laughs every 2 seconds and screams….stupid as ****. Get Trump to do season 5. Bring back Jon Lovitz. Also bring back the diving judges with Greg louganis. That was really fun. Made me happy.