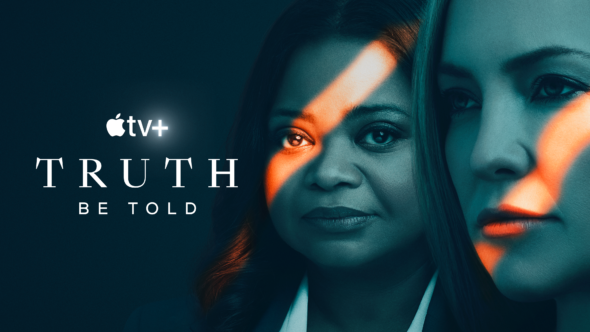 Will Poppy and Micah’s friendship survive? Has the Truth Be Told TV show been cancelled or renewed for a third season on Apple TV+? The television vulture is watching all the latest cancellation and renewal news, so this page is the place to track the status of Truth Be Told, season three. Bookmark it, or subscribe for the latest updates. Remember, the television vulture is watching your shows. Are you?

Unless they decide to publicize viewership, it is difficult to predict whether Apple TV+ will cancel or renew Truth Be Told for season three. Since Apple TV+ isn’t ad-supported, it can take a chance on series it believes in and stories that need telling, but sooner or later it comes down to production costs, versus viewership numbers. It feels like this show is a prestige project for Apple TV+ so, even if viewership doesn’t live up to expectations, I think there’s a good chance it will be renewed anyway. I’ll keep my ears open and an eye out for news, and will update this page with breaking developments. Subscribe for free alerts on Truth Be Told cancellation or renewal news.

What do you think? Are you glad that the Truth Be Told TV show has been renewed for a third season? How would you feel if Apple TV+ had cancelled this TV series, instead?

Glad there will be a season 3 of truth be told. Enjoyed season 1 and 2

There are so many unanswered questions. I loved the show and would love a 3rd season. Please return.

YES!!! Third season is a must!
There aren’t very many shows with this quality of acting, adventurous and detailed story line like “Truth Be Told”. Octavia Spencer is an outstanding actress and she makes the show come alive. Everyone was perfect at their roll. PLEASE LET “TRUTH BE TOLD CONTINUE”