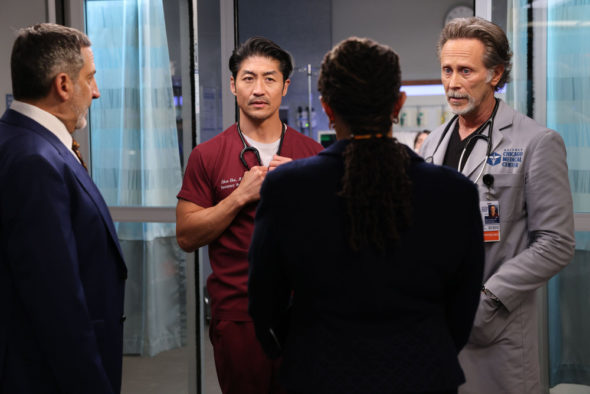 Chicago Med is losing another member of its original cast. Brian Tee (above, center left) is exiting the NBC series after eight seasons. Viewers of the medical drama will see Doctor Ethan Choi depart in this season’s ninth episode, titled “Could Be the Start of Something New,” which is set to air on December 7th. Tee will however return to the set to make his directorial debut with the 16th episode of the season.

Tee said the following about his exit as an actor from the NBC series, per Deadline:

“Playing Dr. Ethan Choi on Chicago Med has been such a gift and a blessing. I am forever grateful to our fans and my colleagues both in front of and behind the camera as I embark on a new journey. I am forever indebted to Dick Wolf, NBC, and Universal Television for choosing me.

What do you think? Will you be sad to see Tee exit Chicago Med later this season?

He will be missed. Love his character

He will be missed!