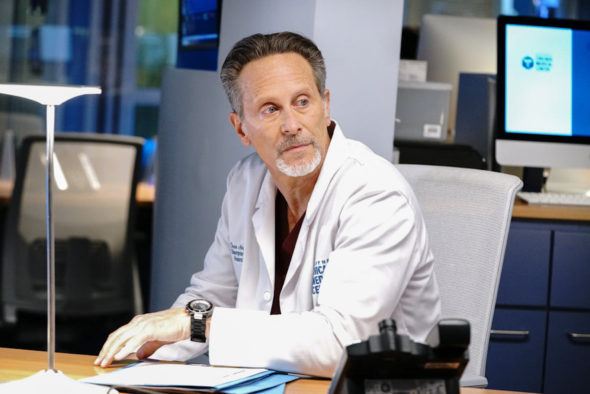 Chicago Med has locked in another cast member. Steven Weber has signed a deal to return to the NBC medical drama as a series regular for season eight. Weber has played Dr. Dean Archer since his arrival on the series in season six and was bumped up to series regular status for season seven.

Deadline said the following about Weber’s role on Chicago Med:

“Weber’s Dr. Dean Archer is current head of the E.D., whose colleagues at Gaffney Chicago Medical Center love to hate—though they can’t deny he’s a great surgeon. That dislike stems from three things: playing a role in fan-favorite Dr. Choi (Brian Tee) getting shot in the Season 6 finale which helped him climb the ranks; his tendency to break the rules in order to get the job done; and his antagonistic approach to dealing with patients.”

This news is just the latest clue about what’s to come on the medical drama. Jessy Schram returned to the NBC drama on last week’s episode. She will remain on the series as a regular for at least the rest of this season.

What do you think? Are you a fan of Chicago Med on NBC? Are you glad to hear that Weber will remain on the series next season?

Don’t like his attitude but I guess that’s what makes him good in the show. I thought Dr. Choi is coming back on the show. Is he or isn’t he???

I agree….am not impressed with him