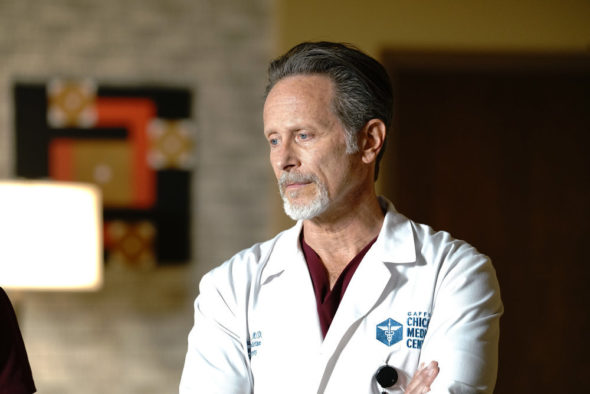 Chicago Med is adding to its cast before the medical drama returns for its seventh season this fall. Steven Weber has been upped to a series regular after stirring things up in a recurring role in season six. His character, Dr. Dean Archer, will be in charge of the ER while Choi recovers.

Guy Lockard and Kristen Hager have also been added to the cast of the series as series regulars. Deadline revealed the following about the cast additions to Chicago Med:

“Lockard will portray Dr. Dylan Scott, who left a career as a Chicago police officer to become a doctor. Whether the doctor has any connections to characters in Chicago P.D. is as yet unknown.

The NBC medical drama will return on September 22nd.

What do you think? Are you excited about the return of Chicago Med on NBC? Did you want to see more of Weber’s character?

I am glad Chicago Med is renewed . I remember Steven Weber from I think he was on Wings. I really don’t like his personality in Chicago Med but that’s what will make this show even better.

I’m very excited that Chicago Med is returning for a 7th season. It’s such a great show and I’m heavily invested in all of the characters!

Going to be curious about what he’s going to be up to.
Awesome cast of thousands, happy for a friend who is an “EXTRA” ON THE CHICAGO SET.

Love Chicago Med but not thrilled with this new addition. To me, he’s just not a likeable character. I’ll still watch it and we’ll see what happens.

What, are they trying to peeve off the viewers? He’s a good addition, but hard to like

I still have few episodes from last season to catch up but when this guy showed up I stopped watching. I don’t say this show is bad, I like it but there is something about him and I just can’t like him or watch him.

Yeah, not my favorite for sure.
Hope they don’t lose Will.

Not too sure about Weber. I didn’t always care for him last season. But we’ll see. Ms Hager is an unknown quantity at least to me. Jury is still out.