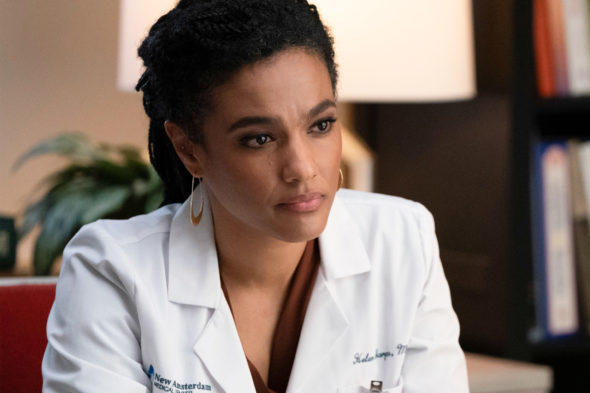 New Amsterdam is returning for its fifth and final season this fall, but, when it returns, the NBC medical drama will be missing one of its original cast members. Freema Agyeman announced her exit from the series on her Instagram account.

“We wish Freema the best of luck on her next chapter and the doors of New Amsterdam will always be open if she wishes to return! We are extremely proud of the impact Freema and Dr. Helen Sharpe have made over these past four seasons and are so grateful to have been a part of that story. As we head into the fifth and final season, we want our #Sharpwin fans to know we still have a few surprises in store for them.”

New Amsterdam returns to NBC on September 20th. The series will wrap up with 13 episodes.

What do you think? Are you surprised by this exit from the NBC drama? Will you miss her character?

I love this medical series I love the entire cast I am sad to see Dr Sharpe leave, but this is sometimes the life of a actor she will be greatly missed I am hoping NBC will see that we need more after season 5 there are several fans that are not ready to say goodbye yet we love you all

The only reason I continued to watch was to see how things turned out with Max and Helen. I don’t agree with the gay storylines and fast forwarded through those scenes. Now that we know Max and Heken will not end up together, I won’t be watching the final season.

This show really should have stopped at season 3 – that is the point at which the woke writer brigade took over and it all just went downhill from that point. I like Freema as an actor, there is no denying her talent and skill, along with the lead actor whose name escapes me, but plenty of the cast were at best average. A fifth season of this seems about as necessary as chocolate sauce on a bowl of vomit. Like every other correspondent below, I shall be choosing to vote with my eyes and they will be on some… Read more »

Like the last season of Bosch, another letdown, won’t be wasting my time on Season 5.

Well, that explains the last episode of season four, doesn’t it?

Got so tired of her character waffling with her relationship and her being a wedding no show ,that was it for me! I quit caring about the show after that.

Too bad. She was cute and I enjoyed her relationship with Max.

this crap is still on tv ?