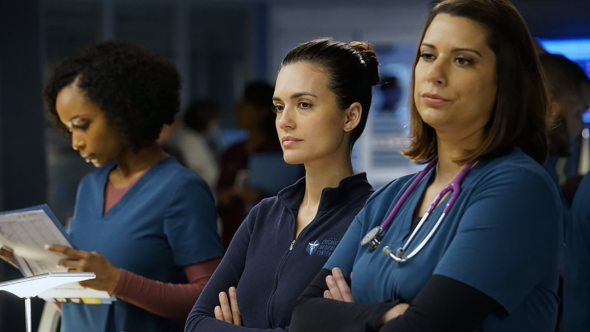 Chicago Med is getting ready to end its sixth season, and two members of the NBC cast will not be returning for season six in the fall. Yaya DaCosta and Torrey DeVitto (above, left and center) are departing the series at the end of the current season, per Deadline.

The NBC medical drama follows the staff at fictional Gaffney Chicago Medical Center. DaCosta has played April Sexton, a nurse in the ER, and DeVitto has played Dr. Natalie Manning, an emergency pediatrics specialist, at the hospital.

The rest of the Chicago Med original cast — S. Epatha Merkerson, Oliver Platt, Nick Gehlfuss, Brian Tee, and Marlyne Barrett — are all in talks to renew their contracts. The series has been renewed through season eight.

Soon after the departures were announced, the actresses went to their social media accounts to share messages with their fans.

What do you think? Are you surprised by these exits from Chicago Med? Do you plan to watch season seven on NBC?

These two characters will be truly missed. I wish they would reconsider and stay!!! They are both huge parts of the Chicago Med story!!

I knew that Dr. Manning was not going to be there much longer with her storyline this season, no way you come back from stealing meds and giving them to your mom. I think that losing Nurse Sexton is also going to be hard for me, I rooted hard for her with her and her relationship with Dr. Choi. I am hoping she exits for med school. I am surprised that Maggie is around still, her greenlighting a procedure with an intern that was not allowed makes me wonder where this storyline is going. The storyline with Dr. Archer is… Read more »