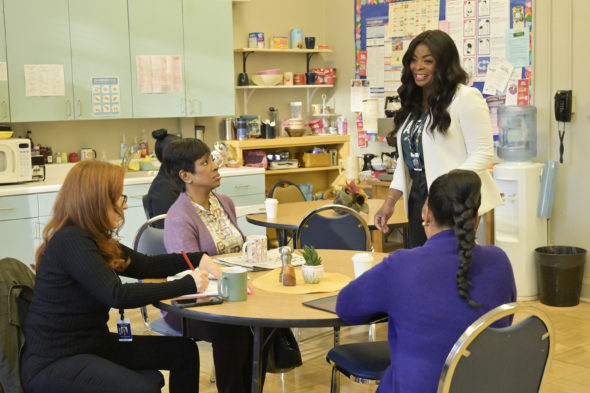 Can these educators keep it together in the first season of the Abbott Elementary TV show on ABC? As we all know, the Nielsen ratings typically play a big role in determining whether a TV show like Abbott Elementary is cancelled or renewed for season two. Unfortunately, most of us do not live in Nielsen households. Because many viewers feel frustrated when their viewing habits and opinions aren’t considered, we invite you to rate all of the first season episodes of Abbott Elementary here.  *Status Update Below.

An ABC workplace mockumentary series, the Abbott Elementary TV show stars series creator Quinta Brunson, Tyler James Williams, Janelle James, Chris Perfetti, Lisa Ann Walter, and Sheryl Lee Ralph. The story follows a group of dedicated, passionate teachers (as well as a slightly tone-deaf principal) as they navigate the Philadelphia public school system. Despite the odds stacked against them, they are determined to help their students succeed in life, and though these incredible public servants may be outnumbered and underfunded, they love what they do — even if they don’t love the school district’s less-than-stellar attitude toward educating children.

What do you think? Which season one episodes of the Abbott Elementary TV series do you rate as wonderful, terrible, or somewhere between? Do you think that Abbott Elementary should be cancelled or renewed for a second season on ABC? Don’t forget to vote, and share your thoughts, below.

*3/15/22 update: Abbott Elementary has been renewed for a second season on ABC.

Typical approach to t v black stereotypes.
Anydody supporting this should think about that!

Abbott Elementary is the best tv show!!! I don’t know which episode is the best!!! I haven’t laughed so hard in a long time. I was a teacher for 35 years and these episodes are so funny but still real.

I love Abbott Elementary. I was so sad when I got to the end of the season. I want more ABC!!! It is a sweet show, with great characters, and made me laugh out loud a few times. We need at least 5 more seasons. Maybe 6.