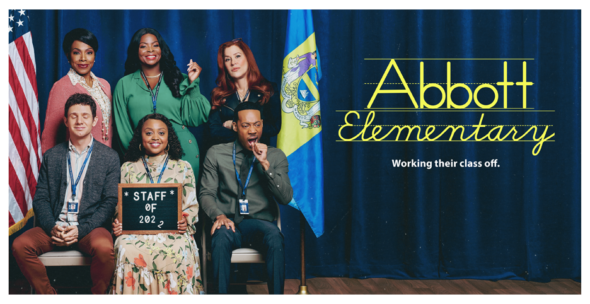 We’ve seen lots of comedy and drama series centered around schools over the years. Some have performed well and had healthy runs while others have been quickly cancelled. How will Abbott Elementary do in the ratings for ABC? Will this comedy be renewed for season two? Stay tuned. *Status Update Below.

A workplace mockumentary series, the Abbott Elementary TV show stars series creator Quinta Brunson, Tyler James Williams, Janelle James, Chris Perfetti, Lisa Ann Walter, and Sheryl Lee Ralph. The story follows a group of dedicated, passionate teachers (as well as a slightly tone-deaf principal) as they navigate the Philadelphia public school system. Despite the odds stacked against them, they are determined to help their students succeed in life, and though these incredible public servants may be outnumbered and underfunded, they love what they do — even if they don’t love the school district’s less-than-stellar attitude toward educating children.

4/13 update: You can see the latest night’s ratings in context.

What do you think? Do you like the Abbott Elementary TV series on ABC? Should it be cancelled or renewed for a second season?

*3/15/22 update: Abbott Elementary has been renewed for a second season on ABC.

I really liked this. I’ll be back to watch it in January when it returns.

Yeah, I hope this show stands a chance!