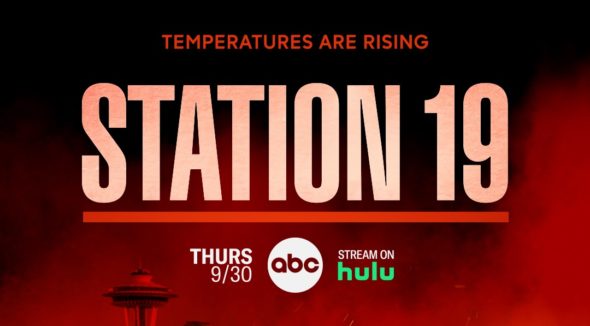 Last season Station 19 actually beat Grey’s Anatomy to become ABC’s most-watched scripted series in the traditional ratings. How will the show perform this time around? Is Station 19 essentially guaranteed to be renewed for season six or, could it possibly be cancelled? Stay tuned.  *Status Update Below.

An ABC first-responder drama series, the Station 19 TV show stars Jaina Lee Ortiz, Jason George, Boris Kodjoe, Grey Damon, Barrett Doss, Jay Hayden, Okieriete Onaodowan, Danielle Savre, Stefania Spampinato, and Carlos Miranda. The TV series centers on the heroic firefighters at Seattle Fire Station 19. From the captain to the newest recruit, they risk their lives and hearts both in the line of duty and off the clock. The brave men and women are like family and together, they put their own lives in jeopardy as first responders to save the lives of others.

What do you think? Do you like the Station 19 TV series on ABC? Should it be cancelled or renewed for a sixth season?

Starting to lose interest in show. Will only watch now if it’s a cross over to Grey’s Anatomy.

It’s sad to see how this TV show has gone down in quality
I watched the first two seasons it was fabulous but after the third season I said no more it was just too lack of better words crappy? Regardless I just don’t watch this program anymore it’s just not worth my time sad because it it has some good values and it was fun to watch

Great show, hate that Gibson & Inara are ending their relationship tho 🙁