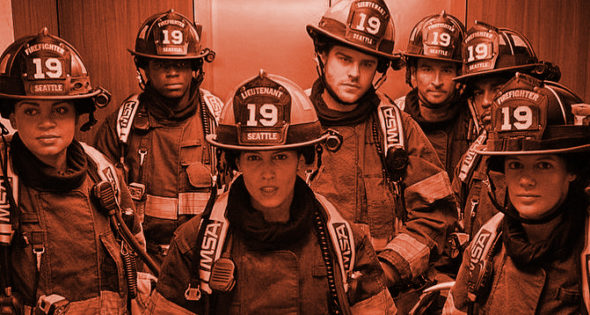 How hot will the action get in the fifth season of the Station 19 TV show on ABC? As we all know, the Nielsen ratings typically play a big role in determining whether a TV show like Station 19 is cancelled or renewed for season six. Unfortunately, most of us do not live in Nielsen households. Because many viewers feel frustrated when their viewing habits and opinions aren’t considered, we invite you to rate all of the fifth season episodes of Station 19 here.  *Status Update Below.

An ABC first-responder drama series, the Station 19 TV show stars Jaina Lee Ortiz, Jason George, Boris Kodjoe, Grey Damon, Barrett Doss, Jay Hayden, Okieriete Onaodowan, Danielle Savre, Stefania Spampinato, and Carlos Miranda. The TV series centers on the heroic firefighters at Seattle Fire Station 19. From the captain to the newest recruit, they risk their lives and hearts both in the line of duty and off the clock. The brave men and women are like family and together, they put their own lives in jeopardy as first responders to save the lives of others.

What do you think? Which season five episodes of the Station 19 TV series do you rate as wonderful, terrible, or somewhere between? Do you think that Station 19 should be cancelled or renewed for a sixth season on ABC? Don’t forget to vote, and share your thoughts, below.

Great show. Been watching from the beginning. Glad it’s back.

This show is awesome, I don’t understand why Dean is gone off the show. I don’t always like some of the romance’s . But the show is entertaining.

I hope that they renewal this show too.

I find this show is starting to get boring now.

It’s the best show Of ABC better than Greys

I think so too

I only watch this show for the cross over to Grey’s. Pretty boring at times

I watch this show. But it is not nearly as good as Chicago Fire. Their is too much personal crap and not enough rescues and calls. Chicago Fire also has alot of personal stuff too, but it’s not as silly as Station 19’s. Kinda surprised this show is still airing.