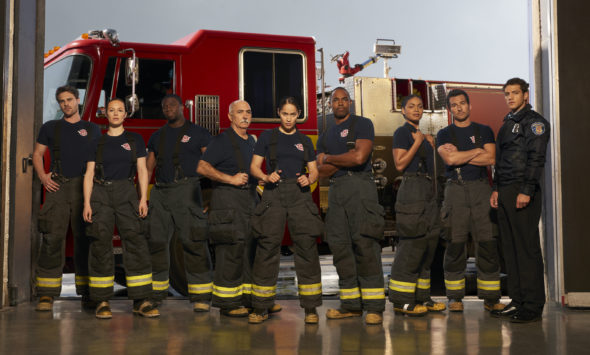 Does the second season of the Station 19 TV show on ABC light your fire? As we all know, the Nielsen ratings typically play a big role in determining whether a TV show like Station 19 is cancelled or renewed for season three. Unfortunately, most of us do not live in Nielsen households. Because many viewers feel frustration when their viewing habits and opinions aren’t considered, we’d like to offer you the chance to rate all of the Station 19 season two episodes, below. *Status update below.

An ABC action drama from creator Stacy McKee, Station 19 stars Jaina Lee Ortiz, Jason George, Grey Damon, Barrett Doss, Alberto Frezza, Jay Hayden, Okieriete Onaodowan, Danielle Savre, and Miguel Sandoval, with Boris Kodjoe joining in season two. The Grey’s Anatomy spin-off centers on the crew of Seattle’s Station 19 — the best of the best. Thanks to close quarters, and the nature of the job, the team at Station 19 has grown into a family. The roots of their relationships run deep, and not all of the action they see takes place on the streets. The second season kicks off in the wake of a deadly blaze, with the life of former Captain Pruitt (Sandoval) hanging in the balance.

What do you think? Which season two episodes of the Station 19 TV series do you rate as wonderful, terrible, or somewhere between? Should ABC cancel or renew Station 19 for a third season? Don’t forget to vote, and share your thoughts, below.

Please bring Staton 19 back for a third season. I love the characters and the crossovers with Grey’s Anatomy. So many harsh TV shows on these days but Station 19 is an example of heroes who have different tragedies to deal with to help others.

Please keep Station 19 going for another season and then some. Love the show and the characters. Station 19 Rocks