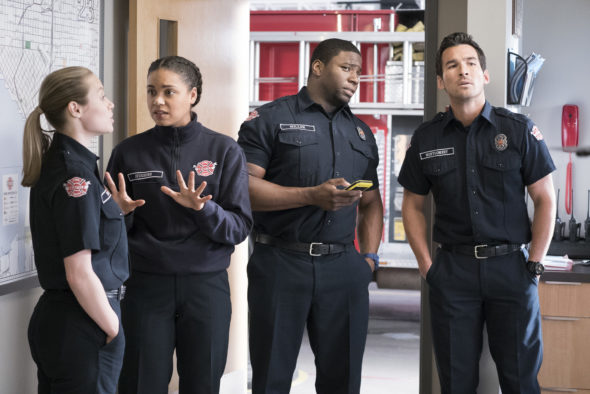 How do Seattle’s first responders fare during the first season of the Station 19 TV show on ABC? As we all know, the Nielsen ratings typically play a big role in determining whether a TV show like Station 19 is cancelled or renewed for season two. Unfortunately, most of us do not live in Nielsen households. Because many viewers feel frustration when their viewing habits and opinions aren’t considered, we’d like to offer you the chance to rate all of the Station 19 season one episodes, below.

An ABC action drama from creator Stacy McKee, Station 19 stars Jaina Lee Ortiz, Jason George, Grey Damon, Barrett Doss, Alberto Frezza, Jay Hayden, Okieriete Onaodowan, Danielle Savre, and Miguel Sandoval. The Grey’s Anatomy spin-off centers on the crew of Seattle’s Station 19 — the best of the best. Thanks to close quarters, and the nature of the job, over the course of their 24-hour shifts, the team at Station 19 have grown into a family. The roots of their relationships run deep, and not all of the action they see takes place on the streets.

What do you think? Which season one episodes of the Station 19 TV series do you rate as wonderful, terrible, or somewhere between? Should ABC cancel or renew Station 19 for a second season? Don’t forget to vote, and share your thoughts, below.

I am hooked please hurry with SEASON 2

I am totally hooked on Station 19 and really cant wait to see what has happened to everyone .So please hurry with Season 2 PPPLLLEEEAAASSSEEE

Our family enjoys Station 91. Look forward to another season.

Please continue the station 19 for season 2

Love this show so much! Hope we get many many seasons of Station 19

Hope to see this excellent show on for many years.

As a career fire Captain of 22 years, I can tell you that this show is crap. So cheesy it’s pathetic with no reality of the real job. I would like to know who the hamburger head is that they consulted or if they they really did consult.

Can there be less romance and the girls walk is like strutting and Jaina Lee Ortiz stinks as a captain!
I’m for women holding top jobs but she stinks.

This was so disappointing… They tried to do too much they had every current issue going on in the world today in each of these two episodes.I found it hard to believe many of the issues they faced and was flabbergasted when I saw a 13-year-old pregnant girl who looked 10 instead of 13 giving birth with the Captain hiding her labor from the girls mother. I just thought that was not necessary I don’t know what you can do to make it better I just think… maybe less..