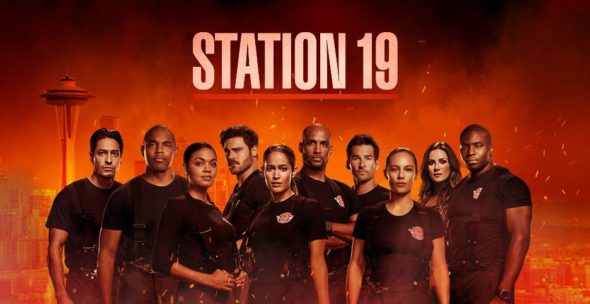 Is this series on fire? Has the Station 19 TV show been cancelled or renewed for a sixth season on ABC? The television vulture is watching all the latest cancellation and renewal news, so this page is the place to track the status of Station 19, season six. Bookmark it, or subscribe for the latest updates. Remember, the television vulture is watching your shows. Are you?

Airing on the ABC television network, the Station 19 TV show stars Jaina Lee Ortiz, Jason George, Boris Kodjoe, Grey Damon, Barrett Doss, Jay Hayden, Okieriete Onaodowan, Danielle Savre, Stefania Spampinato, and Carlos Miranda. The TV series centers on the heroic firefighters at Seattle Fire Station 19. From the captain to the newest recruit, they risk their lives and hearts both in the line of duty and off the clock. The brave men and women are like family and together, they put their own lives in jeopardy as first responders to save the lives of others.

The fifth season of Station 19 averages a 0.62 rating in the 18-49 demographic and 4.48 million viewers. Compared to season four, that’s down by 26% in the demo and down by 14% in viewership in the live+same day ratings (including DVR playback through 3:00 AM). While these numbers don’t include further delayed or streaming viewing, they are a very good indicator of how a show is performing, especially when compared to others on the same channel. There can be other economic factors involved in a show’s fate, but typically the higher-rated series are renewed and the lower-rated ones are cancelled. Find out how Station 19 stacks up against other ABC TV shows.

Will ABC cancel or renew Station 19 for season six? This show has been a very successful companion series for the network’s biggest series, Grey’s Anatomy. The demo ratings aren’t as good but Station 19 still performs quite well and I have no doubt that it will be renewed. I’ll update this page with breaking developments. Subscribe for free alerts on Station 19 cancellation or renewal news.

What do you think? Are you glad that the Station 19 TV show has been renewed for a sixth season? How would you feel if ABC had cancelled this TV series, instead?

Please Please there has to be another series. I Love the show the story lines. It can’t end with Miller like that & everyone not knowing if he gets back home to Pru. Season 6 has to happen

I love this show, and there is more that can come about in this series! Please don’t cancel this show I would be crushed! I can’t wait to watch season 6!

This LGBT fan is tired of all the focus on characters that are not the lead. Maya and Carina are hot, but Maya is not the lead of the show– Andy is. She needs to be developed properly and taken down from her high horse a couple of pegs. I’ve watched since the beginning and it’s time for Andy to step up for real.

Love Station 19! Excellent show! The cast is amazing especially Carina and Maya! They have amazing chemistry together! Love all the episodes so far and I would be very heartbroken if the show doesn’t get renewed! Please renew the show and don’t break up Carina and Maya! Thank you!

The develop a story line then they get away from it. Most stations do it, I’m tired of getting into it then having it cancelled.

I like the show, but if it gets much more like a soap opera, I won’t watch anymore

Love the show. Would like to have a season 6