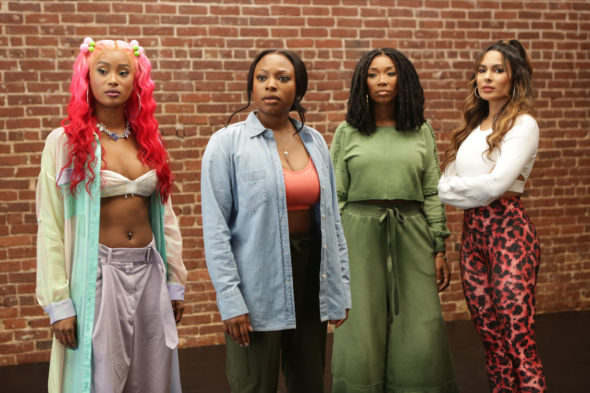 Can the ladies let go of the past? Has the Queens TV show been cancelled or renewed for a second season on ABC? The television vulture is watching all the latest cancellation and renewal news, so this page is the place to track the status of Queens, season two. Bookmark it, or subscribe for the latest updates. Remember, the television vulture is watching your shows. Are you?

Airing on the ABC television network, the Queens TV show stars Eve, Naturi Naughton, Nadine Velazquez, Taylor Selé, Pepi Sonuga, and Brandy. In the 1990s, the Nasty Bitches music group turned the world of hip-hop upside down. Their popularity skyrocketed with the success of their chart-topping single, “Nasty Girl”. Nasty Bitches was once regarded as one of the greatest girl groups of their generation but, despite critical and commercial success, the group was plagued by internal conflict and jealousy. The members are Brianna (Eve) aka Professor Sex, Jill (Naughton) aka Da Thrill, Valeria (Velazquez) aka Butter Pecan, and Naomi (Brandy) aka Xplicit Lyrics. Today, the ladies are in their 40s and are estranged and out of touch. Their former manager, Eric Jones (Sele), sets a reunion in motion and the women reunite for a chance to recapture their fame and swagger from their legendary past.

The first season of Queens averaged a 0.28 rating in the 18-49 demographic and 1.28 million viewers in the live+same day ratings (including DVR playback through 3:00 AM). While these numbers don’t include further delayed or streaming viewing, they are a very good indicator of how a show is performing, especially when compared to others on the same channel. There can be other economic factors involved in a show’s fate, but typically the higher-rated series are renewed and the lower-rated ones are cancelled. Find out how Queens stacks up against other ABC TV shows.

Will ABC cancel or renew Queens for season two? It’s become tougher and tougher for the networks to create successful new drama series. The live+same day ratings aren’t great but they have been consistent and the show sees some nice gains in delayed viewing.  I’m on the fence with this one. I’ll update this page with breaking developments. Subscribe for free alerts on Queens cancellation or renewal news.

What do you think? Were you hoping that the Queens TV show would be renewed for a second season? How do you feel that ABC cancelled this TV series, instead?

Of course it was cancelled successful woman of color supporting each other. Shame on you ABC…

This series was so good! I hope they renew for another series

Yo thats word to my moms if ABC cancel this show i will NEVER view another program by them. Queens is everything. I’m a day 1 fan

The show was so good..was mad when season 1 was over