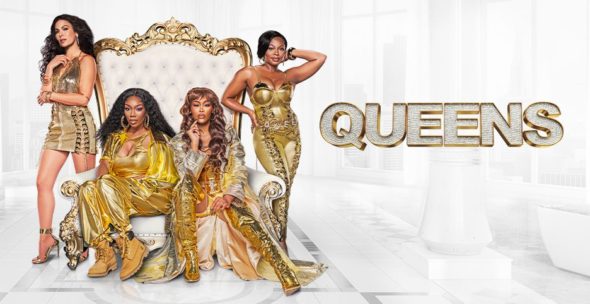 It’s gotten tougher and tougher for the networks to find successful drama series these days. Has ABC found a hit with the new Queens series? Will it be cancelled due to low ratings or, renewed for season two? Stay tuned. Status Update Below.

A musical drama series, the Queens TV show stars Eve, Naturi Naughton, Nadine Velazquez, Taylor Selé, Pepi Sonuga, and Brandy. In the 1990s, the Nasty Bitches music group turned the world of hip-hop upside down. Their popularity skyrocketed with the success of their chart-topping single, “Nasty Girl”. Nasty Bitches was once regarded as one of the greatest girl groups of their generation but, despite critical and commercial success, the group was plagued by internal conflict and jealousy. The members are Brianna (Eve) aka Professor Sex, Jill (Naughton) aka Da Thrill, Valeria (Velazquez) aka Butter Pecan, and Naomi (Brandy) aka Xplicit Lyrics. Today, the ladies are in their 40s and are estranged and out of touch. Their former manager, Eric Jones (Sele), sets a reunion in motion and the women reunite for a chance to recapture their fame and swagger from their legendary past.

2/16 update: You can see the latest night’s ratings in context.

What do you think? Do you like the Queens TV series on ABC? Should it be cancelled or renewed for a second season?

The next show to be cancelled.

Nasty *******? Why? Rehash of an Empire story arc….stop with this Bw are filth stories…nope for me!!

I tried to watch it, but just couldn’t. Hard pass.

Watched about half of it. Tried way to hard to be camp. Awful.

Didn’t watch it. Just can’t bring myself to give it a try.