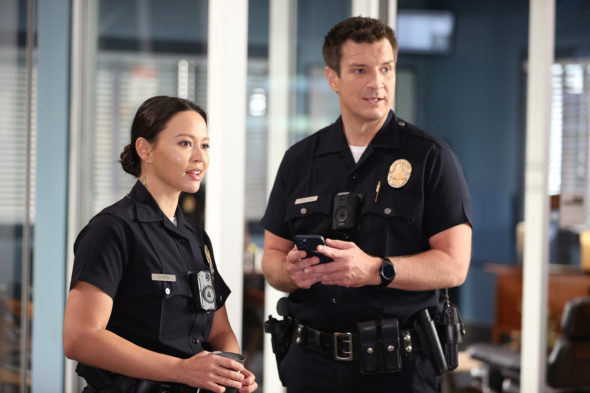 How safe is this show? Has The Rookie TV show been cancelled or renewed for a fifth season on ABC? The television vulture is watching all the latest cancellation and renewal news, so this page is the place to track the status of The Rookie, season five. Bookmark it, or subscribe for the latest updates. Remember, the television vulture is watching your shows. Are you?

Airing on the ABC television network, The Rookie TV show stars Nathan Fillion, Alyssa Diaz, Richard T. Jones, Melissa O’Neil, Eric Winter, and Mekia Cox. As the story begins, John Nolan (Fillion) is a middle-aged divorced man from Pennsylvania. He owns a construction company but decides to give up his old life to pursue a new career as a police officer in the Los Angeles Police Department. He graduates from the Police Academy and becomes the oldest rookie on the force. He works with Sergeant Wade Grey (Jones), Detective Angela Lopez (Diaz), training officers Nyla Harper (Cox) and Tim Bradford (Winter), and fellow rookie Lucy Chen (O’Neil).

The fourth season of The Rookie averaged a 0.36 rating in the 18-49 demographic and 3.18 million viewers. Compared to season three, that’s down by 27% in the demo and down by 15% in viewership in the live+same day ratings (including DVR playback through 3:00 AM). While these numbers don’t include further delayed or streaming viewing, they are a very good indicator of how a show is performing, especially when compared to others on the same channel. There can be other economic factors involved in a show’s fate, but typically the higher-rated series are renewed and the lower-rated ones are cancelled. Find out how The Rookie stacks up against other ABC TV shows.

Will ABC cancel or renew The Rookie for season five? This show’s a middle-of-the-road performer with so-so ratings but it’s co-produced by ABC Studios. I suspect that will be enough to keep it on the air for another (possibly final) year. I’ll update this page with breaking developments. Subscribe for free alerts on The Rookie cancellation or renewal news.

3/31/22 update: The Rookie has been renewed for a fifth season on ABC.

What do you think? Are you glad that The Rookie TV show has been renewed for a fifth season? How would you feel if ABC had cancelled this TV series, instead?

PLEASE change the rock background music on the Rookie. It is terrible.

I’d be upset if it was canceled.

This show has really declined in quality. It’s pretty bad

Please, please, please do not cancel the Rookie, it is a wonderful series with great actors. I love the action and the way each actor gets along with each other. It takes on serious issues but also has some really laugh out loud funny moments. I love the moment when Officer Chen gave Officer Bradshaw her exploding thank you gift.

I love this show so much. for many reason, because I enjoy watching the episode they are good.

Love the show. For some reason, wasn’t recording and had to go back to on demand to catch up. Hope it gets renewed.

Maybe a different time slot w0uld help ratings. Please don’t give up on The Rookie and deprive fans.

It is my impression that they didn’t always have it on, or had it on different
nights. I always had to check when it was going to be on. That is no way to
create big audiences.