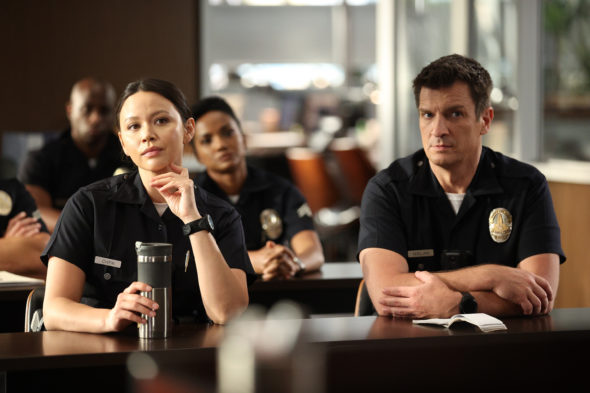 John and his fellow officers will stay on the beat for the 2022-23 television season. The Rookie has been renewed by ABC for a fifth season. The fourth season is currently airing on Sundays and there are six episodes left.

Airing on Sunday nights, the fourth season of The Rookie averages a 0.35 rating in the 18-49 demographic and 2.97 million viewers. Compared to season three, that’s down by 29% in the demo and down by 20% in viewership in the live+same day ratings (including DVR playback through 3:00 AM). In the live+7 day ratings, the series frequently more than doubles its traditional ratings and is averaging a 0.75 demo with 6.28 million. That’s a gain of 116% and 111%, respectively.

This news = ⭐️⭐️⭐️⭐️⭐️#TheRookie is officially returning for season 5️⃣ on ABC! pic.twitter.com/duRJ8XAZ39

Check out our ABC status sheet to track the alphabet network’s new series pickups, renewals, and cancellations. You can find lists of cancelled shows here.
What do you think? Do you look forward to watching episodes of The Rookie TV show on ABC? Are you glad that this cop drama has been renewed for a fifth season?

So relieved that the show is coming for another season. I’ve enjoyed it so much! I hope they keep it for a long time because it not only shows current happenings, it also gives a positive view on life, and we need a lot of that today. Thank you, ABC!!!

The Rookie is a GREAT cop drama. All the females are very believable in their roles. The writing is great, the character development has been fun and interesting. I believe the writing is tackling important issue from a wise and logical place vs just being pc. I hope this series goes at least 10 seasons.

I am so happy that the Rookie has been renewed. I love this show

Glad to see that The Rookie has been renewed. One of my favorite shows. Keep it going!

Yes!!!!! Love the show and characters. So happy to hear it’s been renewed.

Yes, I’m very glad to have another year of The Rookie. Even though I guess Nolan is no longer a “Rookie”, the stories are still fun to watch. Hopefully this show hangs for a while longer.

LOVE this show. Wish Stana Katic had a part in the show. That would be awesome!

Yes! The Rookie is my favorite show. I love the way the show progresses each season. The cast works well together.

I love The Rookie. Its my favorite show on TV.

I am out Sundays and I look forward to having a cup of coffee and watching the Rookie when I get home.