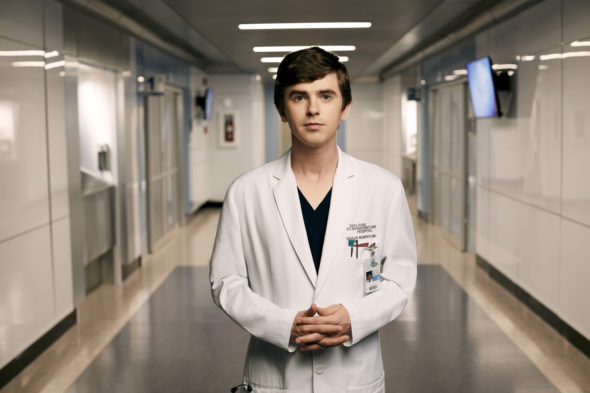 ABC is making a 2022-23 appointment with Shaun Murphy. The alphabet network has renewed The Good Doctor for a sixth season. The fifth season is currently airing on Monday nights.

Airing on Monday nights, the fifth season of The Good Doctor averages a 0.44 rating in the 18-49 demographic and 3.78 million viewers. Compared to season four, that’s down by 27% in the demo and down by 9% in viewership in the live+same day ratings (including DVR playback through 3:00 AM). In the live+7 day ratings, the series frequently doubles its traditional ratings and is averaging a 0.87 demo with 7.17 million. That’s a gain of 110% and 90%, respectively.

Check out our ABC status sheet to track the alphabet network’s new series pickups, renewals, and cancellations. You can find lists of cancelled shows here.
What do you think? Do you still enjoy The Good Doctor TV show? Are you glad that ABC has renewed the series for a sixth season? How long should this medical drama continue?

I love the because the Shawn character is like none other and I enjoy the relationship with doc Glassman.
I particularly loved the wedding and that shocking ending and can’t wait to see next season.

My boyfriend and I enjoy The Good Doctor every Monday night. We are so glad that they are continuing the show. Cannot wait until season 6.

It’s my favorite show.Although I have to admit that it is kind of conditional. If Paige Spara is leaving the show after Season 5 than I will be too. I sure would like an answer to that.

They better renew as this one the two best shows on tv….this and New Amsterdam!

Glad to hear the Good Doctor is coming back for Season #6. Having said that, there has been a noticeable decline in the quality of the writing this season and the show, I feel, has been hurt by numerous cast changes. They sorely miss Clair from the first few seasons. The whole murky storyline involving this strange new “boss” named “Salen” was a flop both story-wise and casting-wise. The whole scenario didn’t work for me. We could also do without the kinky sexual conversations between Shawn and Leia. How about concentrating on Shawn’s incredible gifts of solving medical dilemmas?

They are not coming back. Tonight is season finale.

My favourite show……haven’t missed an episode!

Thank you ABC for keeping The Good Doctor on the air for another year. One of my wife’s favorite shows.

I’m so excited for the new season can’t wait to watch it this is one of the best doctor shows I’ve seen in a long time since ER house was the best I thought of all time.❤

Good news everyone look forward to to see it.

happy the Good Doctors will have another season

Thrilled this show has been renewed for another season. Love the cast and writing. Looking forward to another great season!!

can’t wait to see Dr. Clair Brown.. heard she was coming back soon for a visit @ least 🙂

Great show! Both my husband and I love the show!!