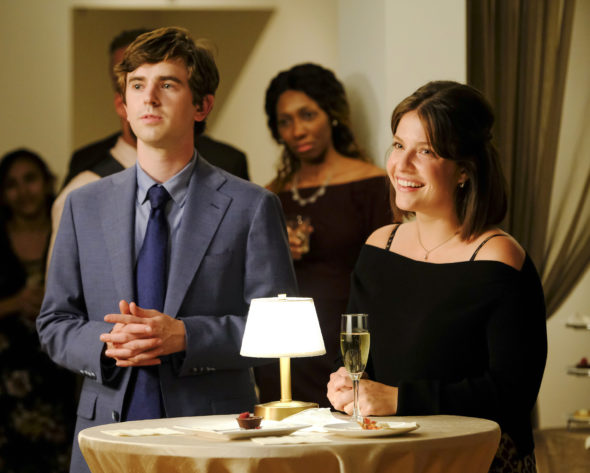 Do Shawn and Lea have a long future together?  Has The Good Doctor TV show been cancelled or renewed for a sixth season on ABC? The television vulture is watching all the latest cancellation and renewal news, so this page is the place to track the status of The Good Doctor, season six. Bookmark it, or subscribe for the latest updates. Remember, the television vulture is watching your shows. Are you?

The fifth season of The Good Doctor averaged a 0.40 rating in the 18-49 demographic and 3.72 million viewers. Compared to season four, that’s down by 30% in the demo and down by 10% in viewership in the live+same day ratings (including DVR playback through 3:00 AM). While these numbers don’t include further delayed or streaming viewing, they are a very good indicator of how a show is performing, especially when compared to others on the same channel. There can be other economic factors involved in a show’s fate, but typically the higher-rated series are renewed and the lower-rated ones are cancelled. Find out how The Good Doctor stacks up against other ABC TV shows.

Will ABC cancel or renew The Good Doctor for season six? It’s become a lot more difficult to successfully launch new shows these days so, as a result, existing series are having longer runs. Despite the ratings decline, I think The Good Doctor will be renewed for a sixth year, providing that Highmore wants to return. I’ll update this page with breaking developments. Subscribe for free alerts on The Good Doctor cancellation or renewal news.

3/31/22 update: The Good Doctor has been renewed for a sixth season on ABC.

What do you think? Do you hope that The Good Doctor TV show will be renewed for a sixth season? How would you feel if ABC had cancelled this TV series, instead?

my favorite TV program! Please keep it for another season!!

Good Doctor is a great TV drama with a great twist. The ratings are down a little because people are finally getting out of the house with the let up of Covid. I record the best of the best so I don’t miss the good ones. Oh and I am a Jeopardy fan since it’s been on TV.