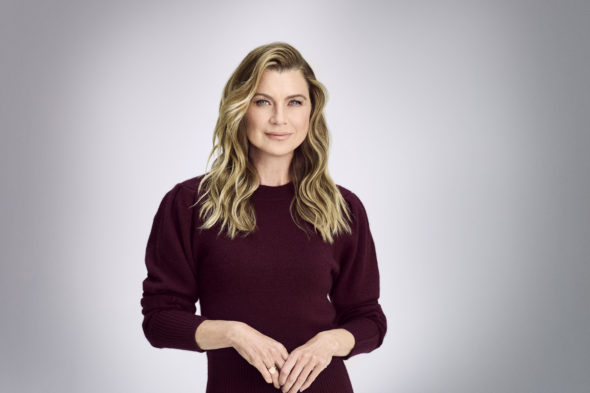 Grey-Sloan Memorial Hospital is staying open for the 2022-23 television season. Grey’s Anatomy has been renewed for a 19th season on ABC and star Ellen Pompeo is set to return.

The 18th season of Grey’s Anatomy averages a 0.64 rating in the 18-49 demographic and 4.20 million viewers. Compared to season 17, that’s down by 37% in the demo and down by 19% in viewership in the live+same day ratings (including DVR playback through 3:00 AM). In the live+7 day delayed viewing, the medical drama averages a 1.26 demo with 6.67 million. That represents a delayed viewing gain of 98% and 59%, respectively.

There have been indications that Pompeo has was ready to end the show but the network has made a point to indicate that she will return. Here’s ABC’s renewal announcement:

ABC Entertainment has ordered season 19 of the iconic and longest-running primetime medical drama series “Grey’s Anatomy” starring Ellen Pompeo. In the upcoming season, the record-breaking Shondaland franchise will explore the ever-expanding world of modern medicine through the eyes of beloved returning and new characters. Executive producer and showrunner Krista Vernoff will continue to helm the series, which remains a global sensation and the network’s No. 1 show this season and the No. 1 broadcast drama among Adults 18-49 (tie).

“‘Grey’s Anatomy’ is a true phenomenon, beloved by audiences around the world. Whether they catch it live on ABC, or stream it on Hulu or globally on Disney+ or Star+, it’s clear that fans can’t get enough of Shonda Rhimes’ brilliant creation,” said Dana Walden, chairman of Entertainment, Walt Disney Television. “We have enormous faith in Shonda, Krista Vernoff, Ellen Pompeo and the entire creative team to unlock new, untold stories that will continue to focus on modern medicine, tackle the issues that shape the world around us, and resonate deeply with loyal fans for years to come.”

“I couldn’t be more excited that we get to keep telling the stories of Meredith, Bailey, Richard and all of the other doctors at Grey Sloan Memorial for another season,” said Shonda Rhimes. “This is a true testament to Krista Vernoff, the cast, the crew and all the writers who keep the audience on the edge of their seat week after week. And it would not be possible without the generations of incredible fans who have supported ‘Grey’s Anatomy’ for so many years.”

“‘Grey’s Anatomy’ has a global impact that can’t be overstated. ‘Grey’s’ touches, and sometimes changes, hearts and minds worldwide through the depth of connection people feel with these characters,” said executive producer and showrunner Krista Vernoff. “I’m excited to work with our extraordinary writers to dream up where we go from here, and I’m always grateful to our partners at Disney and ABC for letting us tell bold stories with real impact.”

Currently in its 18th season, “Grey’s Anatomy” ties as the No. 1 broadcast drama among Adults 18-49. “Grey’s Anatomy” has ranked among the Top 10 entertainment broadcast series in each of its 18 seasons among Adults 18-49 and stood as 2021’s No. 1 most social scripted series. The series averages 12.8 million Total Viewers this season after 35 days of delayed viewing across platforms. Season 18 returns to ABC on THURSDAY, FEB. 24 (9:00-10:01 p.m. EST), in a crossover event with “Station 19.” Viewers can also stream the current season on Hulu.

Vernoff was head writer and executive producer of “Grey’s Anatomy” for the first seven seasons of the show and returned as showrunner in season 14.

About ABC Signature
One of the Disney Television Studios, ABC Signature is a global leader in the development, production and distribution of entertainment content across broadcast, cable and streaming platforms. The studio produces many of ABC Entertainment’s most significant hits, including “Grey’s Anatomy,” “black-ish” and “Station 19”; co-productions “The Good Doctor,” “A Million Little Things,” “The Rookie” and “Home Economics,” and late-night talk show “Jimmy Kimmel Live!” ABC Signature’s returning and upcoming series include “Promised Land” for ABC; Hulu’s “Dollface” and co-production “Woke; “grown-ish” for Freeform; “The Wilds” for Amazon and “Godfather of Harlem” for EPIX. For streaming service Disney +, series include “The Mighty Ducks” and “Big Shot.”

Check out our ABC status sheet to track the alphabet network’s new series pickups, renewals, and cancellations. You can find lists of cancelled shows here.
What do you think? Do you still enjoy the Grey’s Anatomy TV series on ABC? Are you happy to hear that it’s been renewed for a 19th season?

I hope this renewal means they are rapping things up . It’s been long enough, and I started watching in the beginning.

Glad Grey’s is coming back

Given all the grumbling, and lacklustre storylines over the past season or two, I’m a little surprised this got renewed yet again… sure, its a huge cash cow, evidently not just for the network but also for Ellen P, obviously whatever she is being paid more than makes up for her very obvious lack of interest in the show or the story lines. As I say in another post on this, perhaps its time Ellen and the Showrunner left, and maybe its also time to hand it over to a new creative mind, because if the rest of S18 is… Read more »

Seems obvious they’re shooting for 20 seasons here. They might as well have done the renewal for 2 seasons at a time, and been done with it.

I love Grey’s Anatomy! I’m very happy that it won’t end just yet! It’s my favorite show of all time!