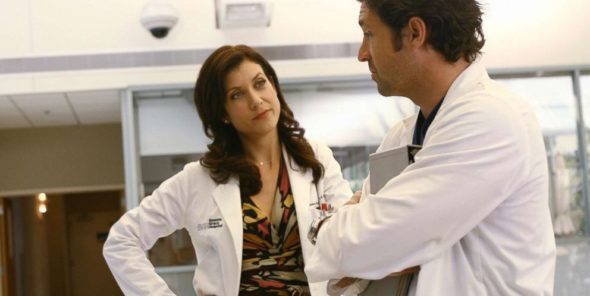 Grey’s Anatomy is bringing back a star from its past. Kate Walsh (above, left) is returning to the medical drama after exiting 14 years ago to headline spin-off Private Practice which followed her character Addison Montgomery’s move to Los Angeles. Her character was once married to Derek Shepherd (Patrick Dempsey), worked at the hospital when it was still Seattle Grace, and is connected to others still on the series.

No further details have been revealed, but her return has been confirmed by ABC and the star herself. Walsh will appear in a multi-episode arc when the series returns later this month for its 18th season, per Variety.

What do you think? Are you excited to see Walsh back on Grey’s Anatomy in season 18?

Maybe they’re giving her another spinoff? You think all those people moved to Boston at the end of last season for no reason??

I have been watching this show for MANY years , we will see what direction the show goes.

Hopefully it means the show is finally ending.

So glad the show is coming back! Been watching the show from the beginning.

Yay! I’m so glad she is coming back!!

hmm we’ll see what this return will bring

I am so happy about this! I’ve missed Addison so much! I’m also glad she’ll be in multiple episodes.