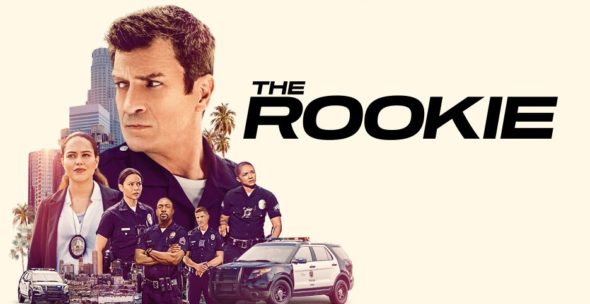 This ABC drama has been a middle-of-the-road performer in the ratings but has managed to secure a renewal each year. Could the ratings take off this time around or, could this be the year that its luck runs out? Will The Rookie be cancelled or renewed for season five? Stay tuned.  *Status Update Below.

A police drama series, The Rookie TV show stars Nathan Fillion, Alyssa Diaz, Richard T. Jones, Melissa O’Neil, Eric Winter, and Mekia Cox. As the story begins, John Nolan (Fillion) is a middle-aged divorced man from Pennsylvania. He owns a construction company but decides to give up his old life to pursue a new career as a police officer in the Los Angeles Police Department. He graduates from the Police Academy and becomes the oldest rookie on the force. He works with Sergeant Wade Grey (Jones), Detective Angela Lopez (Diaz), training officers Nyla Harper (Cox) and Tim Bradford (Winter), and fellow rookie Lucy Chen (O’Neil).

For comparisons: Season three of The Rookie on ABC averaged a 0.49 rating in the 18-49 demographic and 3.73 million viewers.

What do you think? Do you like the The Rookie TV series on ABC? Should it be cancelled or renewed for a fifth season?

Stopped watching cause of the forced romance between Bradford and Chen. Not surprised ratings are going down. The whole kiss was like a scene out of high school.

Please watch the rookie this Sunday. you won’t regret it because it’s a good show and it’s funny too. also, my favorite character are Tim and Lucy still because they are cute together.

Please renew do not think of canceling!!!

Very glad to read that the show has been renewed. Enjoy it every week.

I am very proud of the show. I still can’t believe it will stay on abc for another season. thank you abc for the renewed. have a nice day.